Brief Description: Blackish is another consistently funny and great network comedy that helps anchor a fresh a new comedy line up that includes Fresh Off The Boat and Speechless. The structure of the comedies is basically the exact same as when television started, but what makes them great is their perspective. By changing that slightly and seeing characters through a different worldview than your own, you get the rebirth of sitcoms. 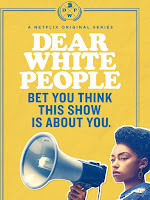 Brief Description: My son was adopted in April, and I remember waking up in the middle of the night feeding him and rocking him to sleep as a watch an episode of Dear White People. It feels apropos considering this exactly the type of show I want him to watch before he goes to college. Based upon his hit Indie film, Justin Simien tells the story of different Black perspectives as they navigate college.

Brief Description: I know the general consensus was the season 3 of Fargo is the show's worst season, but considering I wasn't the biggest fan on the sophomore attempt, I quite liked the latest from Noah Hawley and crew starring twins played by Ewan McGregor. What makes the show work so well is Hawley's masterful interpretation of films by the Coen Brothers- filmmakers who can make a straightforward kidnapping-gone-wrong film like Fargo and also an absolutely delightfully bonkers film like The Big Lebowski. What makes "Who Rules The Land of Denial" so great is the show's ability to play off of the Coen Brothers tropes and create a delightfully masterfully opening where Mary Elizabeth Winstead's character can be chased by goons one minute, and then sitting in a bowling alley of purgatory with The Wandering Jew (played by Ray Wise) the next.

Brief Description: Season 4 of BoJack Horseman dealt a lot with the titular character coming to grips with his past and his relationship with his negligent mother. The series culminates in a trippy penultimate episode where the Bojack's mother (voiced by Wendie Malick) and her dementia flip between the past and present and your left with a David Lynch-ian experience unlike anything you've seen before. A remarkable episode from one of the best and smartest shows on television.

Brief Description: Aaron Sorkin's directorial debut is neither perfect, nor earth-shattering, but his own words and dialogue make for an automatically compelling story. Based on the interesting book and real life of Molly Bloom, a former Olympic skier turned underground Poker game runner, Molly's Game is a solid movie that is worth a rental. The floor of any Aaron Sorkin project is so high that he's turning everything he touches into Must-See entertainment.

16) The Greatest Showman
Starring: Hugh Jackman and Zac Efron
Directed By: Michael Gracey
STARS: 3 out of 4

Brief Description: My enjoyment of this film comes down to two things: 1) I'm familiar enough with the real P.T. Barnum to know what a terrible person he was to the point where Hugh Jackson's portrayal of the man was an outright lie more than viewing him through rose-colored glasses and 2) I'm a sucker for catchy music. I really enjoyed La La Land, and the same people behind that film come back with a vengeance with The Greatest Showman. The songs are so catchy I had to pause in the middle of this description to go watch some scenes on YouTube.

Brief Description: You can't be as big of a movie fan as I am and not enjoy one or ten Steven Spielberg films. Heck, you can't even be a casual movie goer and not enjoy a handful of his films. Despite the obviously slant towards this being a puff piece, I really enjoyed the look back on Steven Spielberg's life and career and just how much he's influenced everything. It's also weird because the film made me respect the director a lot less. He was widely (and rightfully IMHO) criticized early in his career for not being able to make a good, serious, prestigious film. Spielberg tried to prove everyone wrong (mainly with Schindler's List), but after revisiting many of those films, like List, I've to believe that argument more and more.