This post was written by guest writer Cassie from CultureCoverage.com

There is no need to watch television on television anymore because of the advent of Netflix. On top of that, standard shows aren’t the only option for viewers anymore because Netflix has so many outstanding originals to watch. Today, I would like to highlight five of the best that you hopefully haven’t missed. 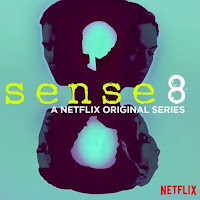 WHY YOU SHOULD WATCH: One of the best science fiction shows you will find on Netflix is Sense8. There is only one season out right now, but it’s well worth your time. This show features an ensemble cast and it follows eight different characters of different cultures. All of these characters are complete strangers to one another, but they eventually realize that they are not strangers at all. After they have a vision of the violent death of a woman, they come to the realization that they are “sensates.” Basically, they are all mentally and emotionally connected to each other. Sense8 probably knows some of the events are completely illogical. However, the beauty of this Netflix original is watching the all of the character arcs intersect. A new season is on the horizon, so now is a great time to catch up.

Email ThisBlogThis!Share to TwitterShare to FacebookShare to Pinterest
Labels: Between, Cassie, Culture Coverage, Daredevil, Jessica Jones, Orange Is The New Black, Sense8, The Best Of On Netflix, Trivia Night

1)  I completely understand that in Peak TV, the Emmy voters are going to leave off some obvious choices just because there’s not enough hours in the day to see everything that’s great. But at the same time, now is the perfect time to jump ship on the old shows floundering and let the new ones roll over you like a calm, sunny day. Shows like Homeland, House of Cards, and Downton Abbey are well past their prime, yet are beloved by the Emmy voters. Every year Emmy voters vote on what they did before and not necessarily on the quality of the individual season in front of them, and every year we get upset. I don’t know why we do this to ourselves.

2) Unfortunately, little room for newcomers meant a shut out for an incredible show like The Leftovers. Justin Theroux was always a dark horse to get a Best Lead Actor nomination, which was always a shame, but there was also no love for Carrie Coon, Regina King, or Kevin Carrol. And even though the show was clearly one of the 7 best dramas according to all TV critics, the show couldn’t beat out other shows about old British people and a CIA agent with a mental disorder.