6 Performances That Deserve Emmy Recognition (But Won't Get It)


Award shows like the Emmys can be very snobby and stick their nose up at superhero shows. The ironic thing is that Jessica Jones isn’t a superhero show, not really anyways. Jessica Jones is a drama that smartly deals with tragedy, rape, power, and PTSD. While it’s true that the show is based upon a Marvel comic book and co-produced by Marvel Studios, any semblance of superhero-ness is just an excuse to tell the deeper and more heartfelt story. The lynchpin holding this story together is Ritter who plays the titular character. Ritter has always been great on television from her work from Breaking Bad to Don’t Trust The B in Apt 23, but she really brings it in this star making role. It’s a shame the show has even a whiff of Superhero on it, because chances are, that whiff will cause Emmy voters to take a pass.

While many of you knew of Theroux before The Leftovers as Mr. Jennifer Aniston, I knew him as a writer with such projects as Tropic Thunder and Iron Man 2. But Theroux really won me over as an actor, bringing such gravitas to this heavy role. Critically, The Leftovers was a bigger hit in its second season versus its first, and probably a lot of that had to do by focusing less on Theroux’s Kevin Garvey and focusing more on The Murphys in Miracle, Texas, but Kevin was still integral to the show’s stellar second season, and one of the best television episodes of the year (probably of the past ten years) was solely regarding a journey of Kevin Garvey. I don’t know how an Emmy voter can watch International Assassin and not give Theroux All The Emmys. As great as Theroux was throughout the entire second season of The Leftovers, Emmy voters look at individual submission episodes versus entire seasons. That process will make Theroux's inevitable snub that much more baffling.

Not a whole lot of people saw The Girlfriend Experience and even less people seemed to enjoy it. It appears that a lot of people's disdain comes from the coldness of its lead character Christine Reads, played by Keough. As such, I can't imagine that Riley Keough has a snowball's chance in hell in earning a nomination. However, and as you can tell from the title of this article, I vehemently disagree. Christine Reade is icy cold, but the character is written that way, and Keough plays that iciness to perfection. This character needs to be tough in order to make it in the world of being a high end call girl and trying to juggle three things at the same time. The whole point of the show is that this character as a tough exterior and its that toughness that gets her through. Not all hookers can be Julia Roberts, nor should they be.

I full-heartedly support living in a world where Sam Elliot always gets a nomination for something. The well-renown character actor has been working a long time and he’s always great at what he does (which is why it’s not a coincidence he’s been working for a long time). His latest stop is a mutli-cam sitcom for Netflix from That 70’s Show alums Ashton Kutcher and Danny Masterson who play brothers helping out their dad, Elliot, on a cattle ranch in the middle of Colorado. The show doesn’t scream “prestige television” or “award winning comedy”, but it does have what Emmy voters want out of a comedy- laughs. (You’d think that would be obvious, but shows like Louie and Orange Is The New Black are testing the boundaries of what is considered a comedy). A lot of those laughs are generated by Elliot, because he’s Sam God Damn Elliot, and you will bow to him and his thick mustache.

This is more a plea to the Emmy voters more than anything, because the Golden Globe nominated actor does have a legitimate shot to earn a nomination- but he’s right on the bubble. Moura played kingpin Pablo Escobar, and he’s the best incarnation that we’ve seen of the Columbian drug lord since Vinny Chase in Season 3 of Entourage. Not only did Moura gain weight for the role and actually learn to speak fluent Spanish, but he perfectly embodied the duality of Escobar. He was extremely charming and likable which is why the people of Columbia loved him, but he was also ruthless and petty which is why the audience loved him. Narcos was one of my favorite guilty pleasures of 2015 and a lot of that was due Moura. 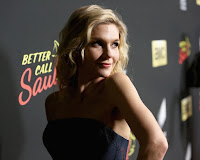 Better Call Saul may have taken a step back creatively, but that certainly wasn’t the fault of Seehorn and her character Kim Wexler. Kim and her relationship with Jimmy McGill (Bob Odenkirk) was one of the lone bright spots throughout the uneventful first half of the show. Vince Gilligan essentially promoted Seehorn and Kim as a co-lead to the show next to Jimmy McGill and Rhea Seehorn made the most out of her opportunity. Seehorn was able to subtly make Kim Wexler both strong and vulnerable while still falling for Jimmy’s charms. Stuck in the dumps of her law firm thanks to Jimmy, she made her slow, meteoric rise interesting and compelling. Often times with Breaking Bad, actors who deserved to get Emmy nominations just depended on how much screen time the writers gave a character. Everyone was excellent, but once minor characters received a promotion so to speak, the audience was able to see them really shine. The same happened for Seehorn’s Kim Wexler in season 2 of Better Call Saul and I hope the Emmy voters take notice.

WHAT PERFORMANCE DO YOU THINK THE EMMYS SHOULD TAKE NOTICE OF BUT PROBABLY WON'T? LET US KNOW ON OUR FACEBOOK PAGE!