As amazing of a film as Pulp Fiction is and will always be, it was a big loser at the 1995 Oscars. Sure, Quentin Tarantino won Best Original Screenplay, but Pulp Fiction lost the Oscar for Best Picture, Best Director, Best Editing, Best Lead Actor, Best Supporting Actor, and Best Supporting Actress. However, if the Oscars had come to their senses a while ago and had a Best Soundtrack category back then, maybe Pulp Fiction would have had added at least one more Oscar to their resume. 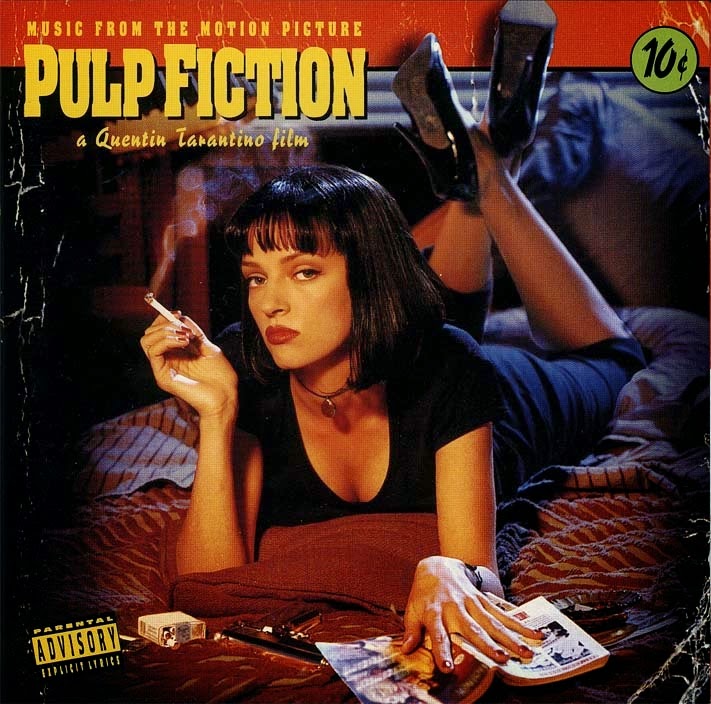 Music has always been prominent in Quentin Tarantino's films- Pulp Fiction in particular. From Dick Dale's Miserlou in the opening credits to John Travolta and Uma Thurman dancing to Chuck Berry's You Never Can Tell to Urge Overkill's version of Neil Diamond's Girl, You'll Be A Woman Soon, you can't think of Pulp Fiction without thinking about the music QT used in the film. Think about Tarantino's other films and you'll reminded of what a genius he is when it comes to blending music and movies. Rick Ross's 100 Black Coffins in Django Unchained, David Bowe's Cat People (Putting Out The Fire) in Inglorious Basterds, Nancy Sinatra's Bang Bang and The 5, 6, 7, 8's Woo Hoo in Kill Bill Vol. 1, and that great opening credit scene in Reservoir Dogs where there's the slo mo of the gang walking away from the restaurant while Little Green Bag by George Baker Selection fills your ears. However, the most iconic musical moment in a Quentin Tarantino film comes from the aforementioned Reservoir Dogs when Michael Madsen is about to chop off the police officer's ear while he's dancing to Steelers Wheel's Stuck In The Middle With You. All of these incredible and indelible moments were made because of the use of pre-existing music. The fact that these songs (sans 100 Black Coffins) were made before Tarantino even wrote the script to his films is irrelevant to impact it had on the film itself and its influence within pop culture.

Quentin Tarantino isn't the only person responsible for using pre-existing songs to enhance the quality of his films. The Graduate is AFI's 17th greatest American film ever made and part of the reason for that is the incredible "score" by Simon and Garfunkel hits. Patrick Bateman had some fun times critiquing Phil Collins and Huey Lewis' Hip To Be Square in American Psycho, having The Dude dance to First Edition in The Big Lebowski, Lloyd Dobler putting a boom box over his head to play Peter Gabriel's In Your Eyes to Diane Court in Say Anything, Wayne and Garth rocking out to Queen's Bohemian Rhapsody in Wayne's World, and Simple Mind's Don't You Forget About Me in The Breakfast Club and again in Pitch Perfect are all great examples and the tip of the iceberg for the iconic use of hit songs in movies.

The best example ever of a pre-recorded hit song making a scene go from good to fucking brilliant was done by the great Martin Scorsese. No, it's not his use of The Rolling Stones' Gimmie Shelter in all of his movies (although it is used perfectly in The Departed and Casino) but it's his use of Eric Clapton's Layla in Goodfellas. Clapton's original recording of Layla is an excellent three minute song that Clapton didn't know how to end so he just riffed for another five minutes. Scorsese used those terrible five minutes that should have never existed in the first place to create a hauntingly beautiful montage that will stick with you forever.

Having hit songs replace the score of the movie and having iconic scenes filled with the songs you love is now coming back in a huge way. For example, David O. Russell famously uses Stevie Wonder's My Cherie Amour and Led Zeppellin's What Is and What Should Never Be in Silver Linings Playbook and The Temptations' Papa Was A Rolling Stone and Santana's Evil Ways in American Hustle and Martin Scorsese uses Bo Diddley's Pretty Thing and 7Horse's Meth Lab Zoso Sticker in The Wolf of Wall Street. A huge part of the reason Nicholas Winding Refn's Drive works so well is because of the soundtrack. On paper, Drive is a pretty boring and bland script, but through Refn's direction and his use of music to fill the (many) silent spaces, Drive became an instant classic. You may have never heard of Kavinsky's Nightcall before 2011, but once you hear it you'll never be able to get it out of your head ever again- and you'll always associate it with Drive.

The use of hit songs is now starting to dominate "popcorn summer flicks" as well. Surprisingly, Baz Luhrmann teamed up with Jay-Z to create an incredible "score" for his version of The Great Gatsby. It's even more incredible than Luhrmann was able to use hip hop from the 2000's for a film set in the 1920's. The Great Gatsby trailer alone is enough to make the film synonymous with its soundtrack, brilliantly using Jay-Z and Kanye's "No Church In The Wild" and Jack White's "Love Is Blindness". Despite what you may think of the film, Pitch Perfect has a soundtrack that dominated pop culture in a film that has left its mark on it. The movie itself is packed with David Guetta's Titanium, Blackstreet's No Diggity, Kelly Clarkson's Since U Been Gone, and Anna Kendricks playing with Cups (Kendrick herself would later earn a Billboard Top 10 hit for the song) which led to the Pitch Perfect Soundtrack becoming the best selling soundtrack in digital history.

This leads us to 2014 and the biggest hit of the year: James Gunn's Guardians of the Galaxy. As of the writing of this post, Guardians is the highest grossing movie of the year and the only film to gross over 300 million dollars domestically. Even if a film like The Hunger Games ends up being the highest grossing film of 2014, there's no doubt the instant classic that Guardians is and has become has swept the country. I've heard film critics compare Guardians of the Galaxy as this generation's Star Wars. When Vh1 does I Love 2014 in 10 years (or probably next year), the one film that everyone will discuss will be Guardians.

There's a shit ton of things that made Guardians of the Galaxy great (actual laugh out loud moments, excellent action sequences, Chris Pratt), but undeniably, the glue that held everything together was Star Lord's Awesome Mix Vol. 1 filled with some excellent songs from the 70's and 80's. There are moments I will never forget about Guardians of the Galaxy solely because of its soundtrack: Chris Pratt singing and dancing to Redbone's Come and Get Your Love during the opening credits, little-Groot dancing to The Jackson 5's I Want You Back, and Peter Quill singing Five Stairsteps' O-o-h Child in a dance off. The excellent use of music in the film should not have been a surprise considering the excellent use of music in the trailers. The use of Blue Suede's Hooked On A Feeling in the film's first trailer helped people get excited about a film starring a talking raccoon, a walking tree, and green assassin while Norman Greenbaum's Spirit In The Sky was the perfect fit to get us pumped up for a space adventure. 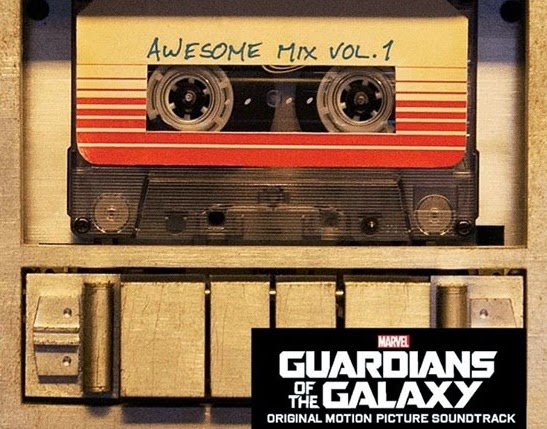 Immediately, once I heard the soundtrack to Guardians of the Galaxy, I knew I had to write a piece advocating for a new Academy category. While I've had this belief for a few years now, Guardians of the Galaxy is the first film to make a legitimate case as the best use of pre-recorded hit songs in a film since Pulp Fiction. There are categories for Best Original Song (songs made specifically for the film) and Best Original Score, but of course, no Best Soundtrack, a category that would reward the use of existing music in film, exists. The Academy is so snooty and particular about the creation of original music before the release of a film, that Lana Del Rey was screwed out of a nomination in 2013 for her work on The Great Gatsby soundtrack just because there were accusations the song was created before the film. The mix up came from Warner Bros changing the release date of the movie from Christmas 2012 to summer of 2013, but that didn't stop voters from failing to consider Del Rey anyways. It's difficult to see The Academy ever caving to adding a new category as bold as Best Soundtrack. You need to have a huge snub like The Dark Knight failing to earn a Best Picture nomination to really shake things up, but I think Guardians could be that film that shakes the belief system of The Academy.

Secondly, adding music to film is difficult. It's more than a combination of classic rock songs. Richard Curtis' Pirate Radio has a soundtrack that reads like my iTunes library with The Who's My Generation and I Can See For Miles, The Beach Boys' Wouldn't It Be Nice, and The Kinks' All Day and All of the Night, but the music did nothing to enhance the quality of the film so both went by the wayside. Guardians of the Galaxy took songs you knew (but certainly were not household names) and made the film better and more memorable. I'd bet you you had no idea who Redbone, 10cc, or The Runaways were before Guardians. You still probably don't know now. It takes an extremely special and delicate skill to choose the absolutely perfect song for your scene, and James Gunn and crew found the perfect balance of tone, recognizibility, and groove to fill the film.

James Gunn and Guardians of the Galaxy will hopefully help pave the way for the Academy to add a Best Soundtrack category now just like Quentin Tarantino has tried to do for years and decades. Although, having a Best Soundtrack in 1995 would have only meant that there was one more category for Pulp Fiction to lose. You see, Pulp Fiction had to go up against Forrest Gump in 1995 in almost every single category, and they lost to Robert Zemeckis and crew every single time. That would not have changed if the Best Soundtrack category existed. It's difficult to compete with Dusty Springfield's For What It's Worth, The Doors' Break On Through, Lynyrd Skynyrd's Sweet Home Alabama, and Creedence Clearwater Revival's Fortune Son- a song in a film that had such a huge cultural impact, we mistakenly believe it was the #1 song during the Vietnam War. The fact that we have a revisionist history on music during the Vietnam War era thanks to Forrest Gump just further goes to show the incredible impact music in film can have on society, and it's about time the Academy recognizes that.

EDS NOTE: I first heard of the wonderful idea of adding a Best Soundtrack Oscar category back in 2012 thanks to Alex Pappademas and Grantland

WHAT ARE YOUR THOUGHTS OF THE MUSIC USED IN GUARDIANS OF THE GALAXY AND DO YOU BELIEVE THERE SHOULD BE A BEST SOUNDTRACK CATEGORY? LET US KNOW ON OUR FACEBOOK PAGE!