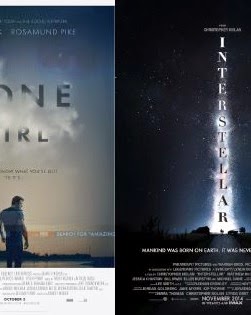 MY THOUGHTS ON THESE FILMS: I grouped Gone Girl and Interstellar together because these films: are made by the two best filmmakers of my generation, led by actors who were complete jokes five years ago, and both look boring as shit. If you didn't tell me who directed these films and just showed me the trailers, these films wouldn't even make my list. But David Fincher and Christopher Nolan will 100% get the benefit of the doubt, and because these men are extremely talented, I'm sure the films will truly be great. Gone Girl is based upon a book by Gillian Flynn, and both my mother and wife tell me it's phenomenal. Great source material + David Fincher's direction should equal genius movie, but these trailers sure don't make it seem that way.

Interstellar is not based off of anything but the brilliant mind of Christopher Nolan. While he is coming off of the first creative dud of his career since Insomnia (The Dark Knight Rises), Nolan easily has the best start to any directorial career ever with Memento, Batman Begins, The Prestige, The Dark Knight, and Inception. Nolan has an excellent eye for big budget science fiction, but if the movie is anything like the trailer, then Insterstellar will be Matthew McConaughey waxing poetic for two and a half hours. And despite the McConaissance, McConaughey's projects themselves have been up and down. Mud was solid but not great, The Wolf of Wall Sreet was incredible (although he's barely in it), The Dallas Buyers Club was just OK but it's fault lay with its indie budget and limited worldview, and True Detective is gorgeous and well-acted, but boring as shit. I just hope I don't say Interstellar is gorgeous and well-acted, but boring as shit.

WHY I'M EXCITED: Ridley Scott can direct an epic like nobody's business (Gladiator, Blade Runner, Alien) but it'll be refreshing to see a modern day Ben-Hur in the midst of the holiday season this year. Fourteen years later, Gladiator is still one of the best films ever made, and Exodus: Gods and Kings looks like another, updated version of Gladiator. Not only can Ridley Scott direct a film that will bring butts in the seats, but Christian Bale is the perfect leading man (despite looking like a non-Jew living in 2014 in a film set in ancient times Middle East) and just a great actor who has a great eye for projects. Lastly, the film is written by Oscar winner Steve Zaillian who is responsible for Schindler's List, Gangs of New York, Moneyball, and American Gangster. The dude knows how to write a damn good good story.

WHY IT COULD BE BAD: Holy hell does Ridley Scott have a horrific track record of the past 10 years. Outside of the surprisingly good American Gangster, he's made Kingdom of Heaven, Body of Lies, Robin Hood, Prometheus, and last year's downright atrocious The Counselor. Now Exodus: Gods and Kings looks like it will be the comeback that Scott oh so desperately needs, but Ridley Scott is on a terrible cold streak.

WHY I'M EXCITED: Taken, The Grey

WHY IT COULD BE BAD: Unknown, Non-Stop, Taken 2

WHY I'M EXCITED: I'll fully admit that I am a 27 year old man who is a fan of The Hunger Games books and movies. They're no Harry Potter flicks, but as far as Young Adult films-based-off-of-books go, The Hunger Games are a clear head and shoulders above the rest. They're nothing amazing, Earth-shattering, or groundbreaking, but they sure are fun to watch.

WHY IT COULD BE BAD: Harry Potter and the Deathly Hollows, Part I was one of, if not the, worst films in the Harry Potter series. The book wasn't split into two parts, but the movies were. Creatively, the final chapter was meant to be read as one, so when you split up the last chapter in a book series for monetary reasons as opposed to creative ones, you ruin the creativity. Mockingjay wasn't meant to be split up, yet the studios split up the book anyways to milk more money out of the franchise. I can easily see The Hunger Game: Mockingjay, Part I being the worst out of all four Hunger Games movies.

WHY I'M EXCITED: As stupid as Dumb and Dumber is, it's sneakily brilliant. Similar to how Zoolander can find the funny in the things that are dumb and silly, the original Farrelly Brothers flick managed to do the same. 1994 was easily the best year for films in my lifetime, and Dumb and Dumber was hands down the funniest movie that year. A sequel 20 years later usually doesn't work, but the trailer looks hilarious and has gotten me on board.

MY THOUGHTS ON THIS FILM: Birdman is like the Johnny Manziel of Fall movies- It could either be great or it could fall flat on its face. Birdman is about a washed up actor who used to play the superhero Birdman on film, and in order to resurrect his career, he writes, directs, and stars in a Broadway version of Birdman. The film looks character-driven, smart, original, and a little bit off, which has the makings of a perfect movie. However, Birdman is supposed to look like it was shot in a single take, and it's being done by a director who's best film on his resume is only Babel. There's a lot of hype surrounding Birdman and I'm starting to get swept up by it, but I still have my doubts because it could be pretentious as hell.

WHY I'M EXCITED: During my first draft of this post, I almost had Horns ranked outside my Top 10. But then as I started doing this and writing about films, I kept moving the Daniel Radcliffe vehicle higher and higher. I'm excited to see Horns because the film looks deliciously twisted. The concept of a man actually becoming a physical incarnation of The Devil because he may have killed his girlfriend looks inventive and funny.

WHY IT COULD BE BAD: For starters, the fact that this is an MTV film worries me a little bit, and the pandering to tweens could be bad. However, Napoleon Dynamite, Zoolander, Election, and Hustle and Flow were all MTV films, so that concern shouldn't be valid. However, the main concern I have with Horns is that I wonder if this concept is more suited as a short film as opposed to a full length feature. Creatively twisted concepts like this one could go either way.

WHY I'M EXCITED: First, a WWII movie? Sign. Me. Up. Despite the film world literally being over-saturated with WWII films and movies,  I love them all anyways. Plus, Fury has what no other WWII film before it has: Brad Pitt. Just kidding, Fury has tanks! I can't think of a single war film that focused on tanks. Secondly, David Ayer is turning into a guy in Hollywood who is churning out really great projects. He first got his start writing the terrible-but-not-really Matthew McConaughey film U-571. That turned into Ayer writing The Fast and The Furious and S.W.A.T. However, along the way Ayer wrote Training Day. He would later go on to write End of Watch, and the studio let him direct that as well. If you haven't seen the surprisingly excellent End of Watch, stop reading this post right now and watch it immediately on Netflix. So that screen in the trailer that looks like this actually does something for me: 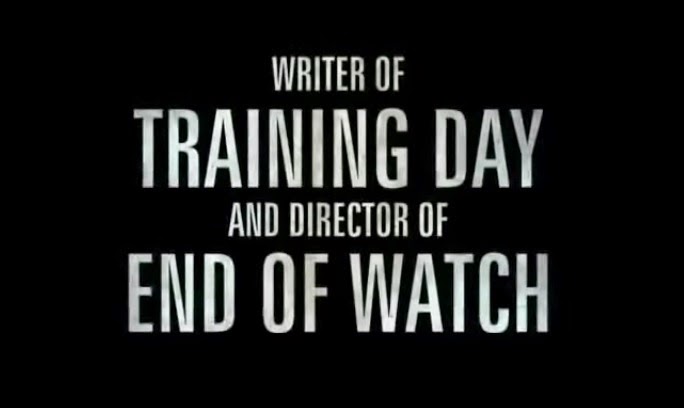 Lastly, I'm excited about Fury because Michael Pena doesn't make bad movies. Despite Pena being a character actor you've never heard of, he just shows up in great projects and kills it.

WHY IT COULD BE BAD: I know a lot of people are expecting me to say Fury will be bad because of Shia LeBeouf, but I won't do it. Despite the massive piece of shit LeBeouf appears to be in real life, I think the dude can act and I don't think he'll bring down the film. I think the only reason Fury might not be very good is just because it fails to distinguish itself from the millions of WWII movies that came before it- or even the WWII movies that are coming out this year.

WHY I'M EXCITED: I think many are predicting that Birdman will be the film of the year, but I'm putting my money on Foxcatcher. Not only does it look less pretentious than Birdman, but Bennett Miller's third film looks like a dark and twisted tale that could turn Steve Carell and Channing Tatum into Oscar winners. I really like Bennett Miller as a director. His first film, Capote, wasn't that fun to watch, but it did give us an all-time great performance from the late Philip Seymour Hoffman. Miller's second film, Moneyball, was surprisingly superb. Moneyball had a lot of pre-production problems, and I'm sure Miller was just perceived as a gun-for-hire, but his visual styling was actually just what the film needed. His third film looks the one that will make Bennett Miller a household name.

WHY IT COULD BE BAD: I actually can't imagine a scenario where Foxcatcher will be bad "per se" but I can envision one where the film is just not as good as I am hyping it up to be. In Hitfix's latest Contender Countdown rankings, they had the film 10th behind others like Interstellar, Gone Girl, and Birdman. Granted, the poll is ranking who will win/get nominated for Best Picture at the 2015 Academy Awards, but the fact that the Cannes darling is so low is still somewhat troublesome.

WHY I'M EXCITED: Seth Rogen has been on a crazy good roll of late. His last two films that he's starred in, Neighbors and This Is The End, have been the funniest two films over the past two years. This Is The End, the directorial debut of Rogen & Goldberg, was my #2 film of 2013 and as of the writing of this post, Neighbors is the funniest movie I've seen in 2014 and my #2 film of the year behind Edge of Tomorrow. The Interview is the second film from Rogen & Goldberg and it looks freaking hysterical. The fall season is going to be full of Oscar players and films that are trying to be prestigious, but sometimes you just need to escape and enjoy yourself at the theaters.

WHY IT COULD BE BAD: The best films written by and starring Seth Rogen (Superbad, Knocked Up, This Is The End) always made you laugh, but they all had heart. Seth Rogen has made a great career about being a stoner man-child, but what has separated his films, and what makes his filmography infinitely better than someone like Adam Sandler, is that his films were deeper and actually meant something versus just two hours of goofing off. I don't know how much heart The Interview will have, or is meant to have, which could end up being problematic. Plus, the first Seth Rogen and James Franco film, Pineapple Express, was not very good.

OTHER MOVIES THAT I AM EXCITED TO SEE:


WHAT IS YOUR MOST ANTICIPATED FALL FILM OF 2014? LET US KNOW ON OUR FACEBOOK PAGE!