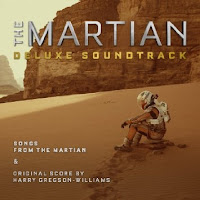 Unfortunately, the Best Soundtrack Oscar does not exist. It is a fake category that I first heard about from Alex Pappademas on Grantland, and an idea that I have loved ever since. Mr. Pappademas proposed adding a category to recognize the use of previously already existing songs in film. For the past two years since I have been doing these Oscar Preview posts, I like to throw in a Best Soundtrack post as well. Music and movies have become an indelible part of our culture and the music supervisors that are able to blend the two together deserve to get awards for what they do. I love writing these posts because I am firm believer in the addition of this category. There already is a Best Score category, so why not add one more category to honor those who successfully use original music to score their film?

Click here if you want to read more about why The Academy should add a Best Soundtrack category.

The specific rules for this category have been a bit flimsy over the years. I've "nominated"films that have a great original soundtrack like Frozen and Begin Again; however, I've realized that those nominations go against the spirit of this category. The purpose of the Best Soundtrack category is to nominate films that effectively incorporate already existing songs. Therefore, if your film is full of songs that are eligible for a Best Song Oscar, you're out. I have also decided that music created by the artist that's the source of the film and/or biopic is out. N.W.A. and Kurt Cobain made some incredible music over the course of their careers, but Straight Outta Compton and Kurt Cobain: Montage of Heck NEEDS to feature their respective artist's music. While those films of course have incredible soundtracks consisting of already existing music (Montage of Heck especially which features unreleased versions of Cobain's music and different versions of his songs so fucking well) they also violate the spirit of this category.

So with all of that being said, here are my personal nominees for the Best Soundtrack category:

KINGSMAN: THE SECRET SERVICE
NOTABLE SONGS: "Freebird" by Lynyrd Skynyrd, "Money for Nothing" by Dire Straits

There are so many iconic scenes from from amazing films ingrained within our pop culture that would never be considered "Oscar worthy". What would Ferris Bueller's Day Off" be without Ferris singing "Twist and Shout" on a parade float? What would Back to the Future be without Marty McFly playing "Johnny B. Goode"? What would Reservoir Dogs be without "Stuck in the Middle With You"? What would Kingsman: The Secret Service be without "Free Bird"? What would the landscape of film look like without these scenes?

Kingsman: The Secret Service mainly gets a nomination from me based upon one scene. While the film does do a good job of using preexisting music throughout its entirety, the Church Fight Scene is the scene that really springs it into the level of other famous music-in-movie scenes. That scene has become instantly iconic and the music playing during the sequence has a lot to do with it. The energy of "Free Bird" brings the life the over-the-top violence to make it one of the best scenes in the history of film.

Dope is about three high schoolers who live in the projects of Los Angeles and love 90's hip hop. They end up getting caught in a drug scheme and need to get through it so they don't lose their chance of getting out of the projects. The three high schoolers have a band called Awreeoh (pronounced "Oreo") that sing some amazing songs in the film (written by Pharell) like Can't Bring Me Down and Go Head that deserved Best Song credit, but the vast majority of the film is scored by the music of these kids fandom. Songs by Eric B. & Rakim, Public Enemy, Naught by Nature, and A Tribe Called Quest score this film and helps accentuate the journey these three kids go on. Dope has a glorious soundtrack that's fun to listen to while watching the film as well as on your drive to work,

THE MARTIAN
NOTABLE SONGS: "I Will Survive" by Gloria Gaynor, "Turn The Beat Around" by Vickie Sue Robinson; "Starman" by David Bowie

The Martian is about astronaut Mark Watney (Matt Damon) who gets stranded on Mars. While it's a pretty devastating experience for him, he uses his humor to get him through it. I understand why many people scoffed at The Golden Globes' designation that The Martian is a comedy, but the tone of the film is so lighthearted and upbeat, just like Mark Watney himself, that I don't think it's as atrocious as people make it out to be. The Martian is about good people doing good things, and the film maintains its optimistic outlook, as well as its humor, throughout the entire film. That tone is accentuated by the film's disco soundtrack.

While Mark Watney is stuck on Mars, the only thing he has to listen to is a disco playlist from one of his other astronauts. The running gag of the disco music not only added much needed humor to this tale of survival, but added much needed tone and themes to the film. It would have been one thing to use "disco sucks" as a joke, but the film takes Mark Watney's dislike of the genre and runs with in in a pretty sensational way.

THE BIG SHORT
NOTABLE SONGS: "When The Levee Breaks" by Led Zeppelin, "Crazy" by Gnarls Barkley

"When the Levee Breaks" was a great song to play over the ending credits about a film that ends with the collapse of America's economy. The amount of greed and stupidity that caused a financial breakdown figuratively opened the flood gates to the shit show that we are only now just starting to recover from. However, the main reason The Big Short gets a nomination from me is its subtle use of song choices to date the film. Sure the film didn't need to put an exact time stamp on it as the events took place not all that long ago, but it's use of songs like "Crazy" by Gnarls Barkley and "Feel Good, Inc." by The Gorillaz were a nice added touch to one of the most difficult films to make.

WHAT FILM DID YOU THINK HAD THE BEST SOUNDTRACK OF 2015? LET US KNOW ON OUR FACEBOOK PAGE!