The Non-Risky Business: How Tom Cruise Neutered Himself to Remain a Hollywood Staple 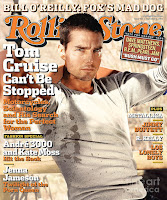 In his 2005 book The Game, author and journalist for Rolling Stone magazine Neil Strauss discusses the week he interviewed Tom Cruise for a magazine cover story. Strauss had just written an article for The New York Times about the underground community of Pick Up Artists (it's also the basis for The Game) which piqued Cruise's interests, and asked to spend time with the author. As Strauss writes in this book, "Tom Cruise was the perfect specimen. He was the [Alpha Male of the Group] that... everyone in the seduction community had been trying to emulate. He had a natural ability to remain dominant, physically and mentally, in any social situation without seeming to exert any effort... Nearly everyone in the community had studied his films to learn body language and regularly used terminology from Top Gun in the field."

This is the persona of Tom Cruise. By almost all accounts, Tom Cruise is the absolute best. As Strauss writes, "He was the first person I'd met since joining the seduction community who didn't let me down." The person who walks in a room and allows his charisma to brighten it. You don't know what "it" is but you're 100% sure Tom Cruise has it. He is the epitome of a movie star. Tom Cruise is Maverick from Top Gun. He is Ethan Hunt from the Mission: Impossible franchise. He is Cole Trickle from Days of Thunder.

Part of the reason Tom Cruise wanted to sit down with Neil Strauss for the aforementioned interview was because Strauss's New York Times article mentions a fellow Pick Up Artist who claims to be the basis for Frank T.J. Mackey. Mackey is the seduction artist played by Cruise in Paul Thomas Anderson's 1999 magnum opus Magnolia. Mackey's first lines uttered in the movie, in a close up shot of Cruise speaking to a crowded seminar filled with desperate men, are, "Respect the cock and tame the cunt." Magnolia came out in the same year as Stanley Kubrick's Eyes Wide Shut, a film where Kubrick seemingly wanted to fuck with the real life marriage of Cruise and his then-wife Nicole Kidman while Cruise spends most of the movie in an orgy in the middle of a mansion. Tom Cruise willingly starred in films that would seem to destroy his Good Boy Persona. Who wants to see their charming leading man act like an Incel on a 4-chan subreddit or sneaking around during a sex party?

Recently I've been on a Tom Cruise movie kick watching Taps, Top Gun, Rain Man, Days of Thunder, The Firm, Magnolia, Collateral, and the first three Mission: Impossible films. There are a few things that stood out to me. The first thing I noticed was just how sexual Tom Cruise used to be. Obviously there's the beach volleyball scene in Top Gun that solely exists for our homoerotic entertainment, and the entire film Risky Business where a teen-aged Tom Cruise bones a hooker, excuse me, escort. But there's the entire first half of John Woo's Mission: Impossible II where Cruise and Thandie Newton's character is straight up fire emojis, and Tom Cruise's relationship with the Nicole Kidman character in Days of Thunder and the Kelly McGillis character in Top Gun. Inert eggplant emojis here. 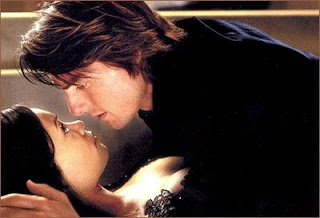 I also noticed that for all of Cruise's traditional, charismatic leading man roles and persona, he sure does play an asshole a lot. Whether he was just starting off as in his role in Taps, most of his work as Charlie Babbitt yelling at his autistic brother in Rain Man, or as a dead beat Dad in War of the Worlds, Cruise can turn that charm on its head. Sure Tom Cruise does play that charming leading man a la Top Gun that we know so well, but he also plays the dick version of that character just as well and just as often.

I was also thinking about Cruise's career when he was acting next to the great Philip Seymour Hoffman (#RIP). Hoffman is in the discussion for the greatest actor of my generation and one of the reasons that got him there was his range. When discussing Hoffman's greatness, we pointed out his ability to be great in a Paul Thomas Anderson drama, but also the funniest thing in a Ben Stiller movie. He had the ability to play a menacing villain, but also add gravitas to a generic studio franchise. You could literally apply this same logic to Cruise. Tom Cruise was great Paul Thomas Anderson's Magnolia, he was the funniest part of Ben Stiller's Tropic Thunder, he was a menacing villain in Collateral, and he'll add gravitas to any number of projects of insert action movie here.

Brad Pitt often gets called a character actor in a leading man's body (and it feels a little bit like an over used phrase after Once Upon A Time In Hollywood), but I feel like you could say that about Cruise as well. In Pitt's defense, we've seen him play an actual supporting character more often than Cruise has (see: Snatch, Burn After Reading, & True Romance), but he also plays the smooth talking, charismatic action star as well. Brad Pitt has Mr. and Mrs. Smith and his role in the Ocean's franchise. Pitt's acting roles has varied, but so has Cruise's, yet we call one man a "supporting actor" and another is the quintessential "leading man". I also feel like it's harder to use the varied acting like Cruise does and apply it to lead roles; whereas Brad Pitt only has to do it for a scene or two. It's easy for a running back to finish a season with a 6.0 yards per carry when you only get 1-3 carries a game. It is so much more difficult to have a 6 YPC when you're getting 15-20 carries a game. The point is, I want us to give Cruise more credit for his acting ability than I feel like we're giving him. Also, both actors have 3 Academy Award nominations for acting and no wins. #JustSaying.

For almost all of Tom Cruise's career, his decision to pick roles depended largely upon which great director he could work with. A lot of those collaborations also forced Tom Cruise out of his comfort zone, largely to critical success. The list of incredible directors Tom Cruise has worked with is staggering, and rivals almost any actor, living or dead. It feels as though once Tom Cruise had more say in what roles he wanted, the more he shined. Crusie worked alongside Paul Newman in Martin Scorsese's The Color of Money. Soon after he worked with Rob Reiner (during a fucking incredible 5 movie run by Reiner) of Aaron Sorkin's script of A Few Good Men. He took his turn in a John Grisham adapted, Sydney Pollack directed film of The Firm, and made an all-time rom-com classic with one of the genre's masters, Cameron Crowe, with Jerry Maguire. Cruise would latter team up with Crowe again in a film where the actor wore a mask over his face the entire time in Vanilla Sky. Cruise has also worked with Steven Speilberg (twice), Ridley Scott, Ron Howard, Francis Ford Coppola, and Robert Redford. And not to continue to belabor the point, Paul Thomas Anderson and probably the greatest director of the medium, Stanley Kubrick.

This career worldview all changed since 2008's Valkyrie. Cruise not only largely stopped working with the cream of the crop directors (or maybe he ran out of directors to work with), but mainly started working with one man: Christopher McQuarrie. McQuarrie is not only the one person to direct Cruise in more than two films (he's done it thrice: Jack Reacher and the last two films in the Mission: Impossible franchise), but McQuarrie is also the writer or co-writer of Jack Reacher: Never Go Back, Edge of Tomorrow, and The Mummy. McQuarrie also co-wrote Top Gun: Maverick, and is writing and directing the 7th (and, as of now, 8th) Mission: Impossible film. I don't think, not-coincidentally, 2008 was also the year of Iron Man, the first film to set up the Marvel Cinematic Universe, and eventually became the standard bearer for the current state of cinema as we know it.

Largely thanks to Marvel, Hollywood was doing its best to "event-ize" movies. If people were only going to the movies to see big action flicks or franchise films, then Tom Cruise was going to make sure he was along for the ride. Cruise did his best to hide original work in this wave, see: Edge of Tomorrow. It's a smart and fun script, and it also allowed Cruise to play against type. Sure we like our confident superheroes and confident secret agents like Ethan Hunt, but Cruise starring as a sniveling coward who was thrust upon this action was extra special. Yet for as good as Edge of Tomorrow was, it famously "bombed". Accordingly to IMDb.com, the film cost $178,000,000.00 to make and grossed $369,206,256.00 world-wide, so, ya know, put "bomb" into perspective, but sometimes, in this business, perception is reality.

Before Edge of Tomorrow, Cruise made Knight and Day, the fourth Mission: Impossible film, Jack Reacher, Oblivion, and *checks notes* Rock of Ages. Big, loud, studio films meant to be a part of "hey, we know you only see three movies a year in the theaters, make this movie starring Tom Cruise one of them". Since Edge of Tomorrow, Cruise made two more Mission: Impossible films, a second Jack Reacher film, The Mummy, a film that was supposed to set up a Monsters franchise from Universal Studios, and American Made. Films that skid even harder into franchise work and brand management. Again, two more Mission: Impossible films are in the works for Cruise, we have a Top Gun sequel coming in 2020, and according to Tom Cruise's IMBb page, there's an Edge of Tomorrow sequel in the works. Live, die, repeat indeed.

Filmmaker Pedro Almodovar was recently asked if he'll make a Marvel movie, and immediately expressed his distaste for the genre claiming that "Sexuality does not exist for superheroes" and calling them "neutered". This is also what Tom Cruise has become, which should not come as a surprise considering Marvel's dominance has become too influential. The man who used to drip sexuality when he was younger; the man who fucked a hooker when his parents went away for the weekend and who explored his relationship and who explored an orgy 20 years ago is now an asexual superhero secret agent who excels at running. Ethan Hunt used to flirt with his targets and co-workers and once got married now just exists on-screen with them. The man who told men to "respect the cock and tame the cunt" and who inspired IRL Pick-Up Artists has now just become a vessel for franchise movie action movie-making. On one hand I get it, because that's basically what Hollywood and the movie industry has become nowadays, but on the other hand, as a fan, I wish Tom Cruise would start becoming a legit risk taker and play three-dimensional roles to go back to the Old Tom Cruise we know and love.
Posted by Adam Kaplan at 9:35 PM