Before you know it, the 2013 Primetime Emmy nominations will be released, and then we will be in full television swing. I decided to get the party started with my predictions for nominations. While there have always been great and amazing shows in recent years, it seems that now more than ever, the quantity of those great shows are increasing. That is why I decided to do my odds columns of who I think will and should earn a nomination for Outstanding Drama Series at the 2013 Emmys.

Even though Season 6 is not yet over, Mad Men is in the midst of having a great 6th season. With five nominations and four wins for Outstanding Drama Series, Mad Men is an easy lock to earn a nomination this year. The only way the 60's period drama doesn't earn a nod is if the last four episodes are just a ginormous pile of garbage. And even then I'd doubt it

The first half of Breaking Bad's final season was probably the worst season it's ever aired- and it was still the best show on television. Breaking Bad has earned an Outstanding Drama Series nominations in each of it's four years of existence, and I'd highly doubt it would not receive one this year. 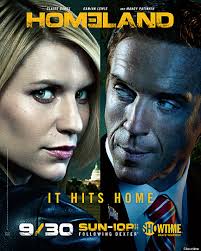 I loved the first season of Homeland. I thought it was spectacular, and while I didn't think it was the best show during the last Emmy period, I wasn't inherently upset by the win- especially considering it beat out Mad Men's terrible Season 5. But now I am extremely upset by the win, because that means Homeland is almost a guarantee to earn a nomination again this year. Despite the fact that Season 2 not even close to being a top 6 show nowadays, it wasn't THAT good at all. My brain tells me that Homeland's odds are at 100%, but I also (naively) believe that quality wins out. That is the reason for Homeland's odds drop.

I do my best to watch all television shows that we as a society within pop culture think are great. Downton Abbey is one of those shows. But after two seasons, I give up on it. This show is not for me. But do you know who this show IS for? Old people. And do you know what the voting constituency of Emmy voters consists of? Old people.

It's amazing how the show could lose it's best character (although not it's central, lead character) and have the best season to date. But Winter (a former Sopranos writer) managed to do that. Nucky Thompson (Buscemi) came into his own just as the show did. It's gotten an Emmy nomination in it's past two seasons, and I'd be hard pressed to believe it won't get a third.

For some reason, Game of Thrones feels like the odd man out (if there is one in 2013) between the six programs that earned a nomination in 2012. GoT is still wildly popular, and while it hasn't done anything to diminish itself per se, it hasn't done anything to really distinguish itself either. Now as of this writing, Game of Thrones still has two episodes left to air, and last year's penultimate itself was Blackwater, which was the best single television episode of 2012, so you never know. While it does not deserve to get knocked out (both Homeland and Downton Abbey have earned that right), I can easily see it getting bumped for...

There are two things the Emmy's like: something it's already liked before (hence Mad Men winning four straight times; Bryan Cranston and Aaron Paul winning every nomination they get), and the shiny new toy they can't stop playing with (hence Homeland's crazy night last year). House of Cards falls in the latter category (obviously not the former). It's not only new in how it's (potentially) revolutionizing the way we watch television, but it's also a crazy good show. The Emmy's also suffer from Little Brother Syndrome and tend to love movie stars "slumming it" on TV. Kevin Spacey and Robin Wright (along with director David Fincher- who is not only a lock to get a Best Directing Nomination, but also to win it, like how Martin Scorsese did for directing the Boardwalk Empire pilot) help the show's chances as a whole to get nominated. I would put big money on House of Cards earning a nomination, but the problem is that I really don't know who they would kick out.

The Americans (Season 1) FX
Created By: Joe Weisberg
Odds Of Earning A Nomination: 70%

The Americans also falls into the category of The Shiny New Toy that the Emmy's like. However, as Alan Sepinwall pointed out/complained about, we live in an age of too much good television, which is really The Americans biggest obstacle. The critics LOVED The Americans, and it's a lock to earn a TV Critics Award. But the Emmys are not TV critics, and between House of Cards and The Americans, I think House of Cards gets the nomination, and I don't think it's close. It's also on FX, and as we'll see later, no matter the quality, FX shows have a hard time getting nominated. OK, apparently there are MANY obstacles in The Americans way.

The Newsroom (Season 1) HBO
Created By: Aaron Sorkin
Odds Of Earning A Nomination: 70%

At least in terms of the zeitgeist, Sorkin's The Newsroom is the worst show on this list (in terms of quality). I personally haven't seen the show, so I won't judge it, but based upon what I've heard and read, the show's biggest problem is itself. I have friends who swear by it, but my friends are not the ones doing the nominating. That being said, The Newsroom is still an HBO show, and its still a show created by the amazing Aaron Sokrin. That does count for something. It also will try to nominate its first season which also counts for something. Lastly, it did receive a Golden Globe nomination, which again, does count for something (although it earned a nomination over Mad Men which would NEVER happen at the Emmys, and it didn't have to compete with House of Cards and The Americans). Those factors is why I put it's nomination odds so high. However, if it doesn't earn a nomination this year, it never will.

Any Drama On Cable (CBS ABC, NBC, Fox)
Odds Of Earning A Nomination: 15%

Last year, no drama on the four major networks earned a nomination for Outstanding Drama Series. As well they shouldn't have. The best T.V. shows AREN'T on cable. Ever since Oz and The Sopranos aired om HBO, the really good to the greatest television programs have been on other networks. I think the new shows that have the best chance to earn a Primetime Emmy nomination are The Good Wife (CBS) and Revolution (NBC). The Good Wife already has two Emmy nominations, but after it didn't receive one last year, I didn't think it will receive another one ever again. The other show that I think has a chance, albeit a small one, is Revolution. It is most like Lost (a cable drama that received four Outstanding Drama Series nominations) and a show that is legitimately popular (something which NBC can surprisingly boast about). However, in an age of great non-cable drama, I don't realistically see any of them earning a nomination in 2013.

Season 2 of Justified is one of the greatest single seasons of television of all time. A lot of that had to do with Margo Martindale as Mags Bennett. She was so good that, out of nowhere, won the Emmy for Best Supporting Actress. Yet despite at how good Season 2 was, Justified did not earn an Outstanding Drama Series nomination. In fact, it never has earned one. Realistically, that means Justified will not earn one this year. But it's been, hands-down, the best television program of 2013 and one of the best shows during this Emmy season. That means it has at least SOMEWHAT of a chance.

Which of these season has been your favorite in the past 12 months?