1) Gravity was the big winner at last night's Academy Awards. It walked away with the most awards- seven, including: Best Director (Alfonso Cuarson). The vast majority of the Oscars are technical awards; it's why The Lord of the Rings: The Return of the King and Titanic were able to walk away with a bajillion awards. Therefore, it should be no surprise that the biggest technical achievement of the year took home so many Golden Statutes. As a good friend of mine stated for his Oscar pool, "when it doubt, just pick Gravity" It also won Best Cinematography, Best Visual Effects, Best Sound Mixing, Best Sound Editing, Best Film Editing, and Best Score.

2) 12 Years A Slave won Best Picture (thus giving director Steve McQueen and Brad Pitt Oscar wins). The film won 2 other awards including Best Adapted Screenplay (John Ridley) and Best Supporting Actress (Lupita Nyong'o) I don't have an inherent problem with the latter two, but I strongly disliked the movie 12 Years A Slave as a whole. Just from a film making perspective, it was just "eh". If you didn't fall asleep in the middle of the film and constantly look at your phone, then you're lying. If it was truly between Gravity and 12 Years A Slave, it's Gravity for the win for me.

3) American Hustle was the big loser of the 86th Annual Academy Awards as it tied Gravity with the most nominations (10), yet it didn't win any awards. I'm confident that if Jennifer Lawrence actually campaigned she would have won for Best Supporting Actress. It probably should have won Best Costume Design as well, but it's hard to argue with The Great Gatsby win.

4) Another film that got completely shut out was Nebraska. Although, unlike American Hustle, the snub was expected. I don't know how anyone watched the film and wasn't head over heals with Best Supporting Actress nominee June Squibb. Jennifer Lawrence and Lupita Nyong'o (the two front runners) were very good, and I wouldn't be upset if either one (obviously Lupita did win), but June Squibb was just outstanding, and she deserved more love this Oscar season.

5) Her was another great film, but it was able to get an Oscar win. Writer/Director Spike Jonze won for Best Original Screenplay, and the win was well deserved. Not only was the script for Her wonderful and brilliant, but Jonze also deserved this win for his career which includes: Being John Malkovich, Where The Wild Things Are, and Adaptation.

6) I thought the best film of 2013 by far and away was Martin Scorsese's The Wolf of Wall Street. I thought this was one of Marty's 5 best films ever, Leonardo DiCaprio did his best acting ever, and (although it's not saying much) so did Jonah Hill. The film was able to squeak out nominations for Best Picture, Best Director, Best Actor, and Best Supporting Actor, but this was a case where (unfortunately) the nominations were the win. Many thought Leo could upset Matthew McConaughey for Best Actor, but that was not the case. Poor Leo. He'll never be able to get an Oscar win. 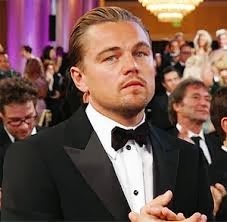 The internet feels for you Leo.

7) Speaking of Matthew McConaughey, his first ever nomination resulted in an Oscar win as he won Best Actor for his Oscar-bait role in Dallas Buyers Club. Alright, alright, alright! His co-star Jared Leto won the first award of the night (Best Supporting Actor) for his work in the film as well. The movie won one more award as it beat out Jackass Presents: Bad Grandpa and Lone Ranger for Best Make Up and Hair Styling. McConaughey and Leto were good in this film, and it's not like their wins are extremely upsetting, but I don't know if they "deserved" to win. Maybe because I saw Dallas Buyers Club after all of the hype, but I didn't think their acting was all *that* spectacular.

8) Frozen won 2 Oscars: Best Animated Film and Best Original Song ("Let It Go"). I loved the film, and if it was released in the 90's around the time of The Lion King and Beauty and the Beast, then it would have been an instant classic. Robert Lopez, who co-wrote "Let It Go", was able to EGOT (Emmy, Grammy, Oscar, Tony) with this win- which the Academy announced during the telecast. I love that a "30 Rock" reference is now permanently ingrained in our lexicon.

9) 20 Feet From Stardom won Best Documentary beating out Joshua Oppenheimer's The Act of Killing. The Act of Killing won the BAFTA for Best Documentary, was voted the best film of the year by the extremely pretentious Sight and Sound, and is extremely overrated. 20 Feet From Stardom was no great shakes either, but it was better than The Acting of Killing. If I had an Oscar vote, I would have given it to Cutie and the Boxer, but then again, I also would have made sure Blackfish got a nomination to begin with.

10) 4 out of the 5 documentaries nominated for Best Documentary were streaming on Netflix, but the eventual winner was not. The only film nominated for Best Foreign Language film (Denmark's The Hunt) streaming on Netflix also did not win- that went to Italy's The Great Beauty. The only animated film nominated for an Oscar (The Croods) did not win as well. On one hand, I'm glad the films streaming on Netflix didn't win and Academy voters voted for quality first and foremost, but as a movie fan who can't afford to see every movie, I'm a little bummed. For my own selfish reasons, it would have been nice if Netflix's accessibility to films influenced voter decisions, but I guess if you're in The Academy, you get free screeners.


What are your thoughts on the 2014 Academy Award winners?