HERO OF THE WEEK
BATTER 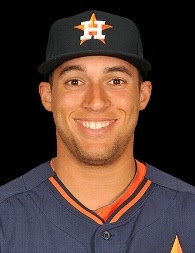 After an extremely slow start, the young Houston phenom is just destroying the crap out of the ball recently. He's led all major leaguers in home runs (6), runs (11), and RBI's (14) while hitting above .400 over the past 7 days. Springer already has double digit home runs on the year, walking at least 10% of the time, and he's going to be really, really good sooner rather than later. I'm sure he was already owned in any keeper league, but he's only 81% owned in Yahoo! leagues. The fact that he's not 100% is absurd to me.

There were a lot of great pitchers I could have gone with (King Felix, Chris Archer, Zack Wheeler), but I decided to go with the Detroit great. On the 23rd against the Rangers, Sanchez went 7 innings striking out five, walking none, while only giving up two earned runs. Five days later, in Oakland, Sanchez went 8.1 innings, struck out nine, walked one, gave up one ER, and would have gotten his second win of the week (and given up 0 ERs) if Joe Nathan was good at his job. Sanchez boasts a 2.49 ERA for the year with a FIP just a touch below that, striking out 8.5 batters for every 9 innings, and will be a top 15 starting if he's healthy (albeit is a big "if").

There weren't any major injuries this week, so I'll just go over some guys who are owned in not many leagues that you should pick up.

In case Jason Kipnis isn't all that and a bag of chips coming off of the DL or in case Robinson Cano goes on to it:

- Seth Smith (40% owned): Smith is hitting over .300 with 6 home runs. As a lefty batter and specialist, Smith won't be in the line up every day, but in daily leagues, he's worth monitoring.

Struggling is an extremely relative term as he has four wins, 84 strike outs, a WHIP under 1.20; however, his 4.42 ERA has fantasy owners concerned. Most people who drafted Price drafted him as their ace and he hasn't lived up to those expectations. The ERA is mainly what fantasy owners look at even though Price has been good to outstanding in three out of the four categories he's useful in. While Price owners are clearly not dropping him, they shouldn't be selling him either. Price has a 3.20 FIP and a .332 BABIP, which means his ERA is going to drop and drop drastically. If you're looking for an ace pitcher to "buy low" on, Price is your guy to target.

*NOTE: All % ownership are via Yahoo!

HAVE ANY FANTASY BASEBALL QUESTIONS? ASK AWAY ON OUR FACEBOOK PAGE!