Brief Description: Recently I wrote a post about the 4 shows in competition for the title of the best show currently on television. If I had to cast my vote right now, I would probably cast it for Game of Thrones. Not only does it have the ability to be the most entertaining show on television, but it's one that is starting to weave in themes and consistency more and more. That's extremely tough to do considering David Benioff and D.B. Weiss have to tell the best story based upon George R.R. Martin's books first and foremost. But an episode like "Oathkeeper" does a great job of having characters live up to this title. From Brianne of Tarth keeping a promise to Jamie Lannister (from which the title of the show obviously gets its title from) to Daenerys doing what she can to free the slaves of Meeran as well as using editing to weave together seemingly random scenes (i.e. having Margie and Olenna talking about Cersei, smash cut to Cersei yelling at Jamie), Game of Thrones is contradicting its own motto that "themes are for 8th grade book reports".

Brief Description: Another show in the running for being one of the best on television is Matthew Weiner's masterpiece. Even though not a whole lot has happened this season, "Field Trip" is my favorite episode so far. It's not nearly as thematically rich as "A Day's Work" or "Time Zones", but that's probably why I like it so much as "Field Trip" doesn't play out like a high school English assignment. After spending two episodes (and a handful of months in Mad Men time) in limbo, Don Draper finally goes back to work for Sterling Cooper (& Associates). I never understood why Don just didn't go to another firm (like what Jim Cutler wanted him to do) and we get an explanation here why. Don is still a partner and with that comes some hefty consequences if he's let go. We'll now get to see if Don Draper truly has changed, and if so, will that change bring enjoyment to the audience. Lastly, I'd be remiss if I didn't bring up the return of Betty. She was used in just the perfect small dose here to show us why we all hate her, yet need her around to mock.

Brief Description: It is very possible to have a successful sitcom without caring for the lead character and/or having the lead character being the least appealing of them all. Ted is by far the least appealing and most annoying out of the five friends in How I Met Your Mother. J.D. could be funny at times in Scrubs, but his annoying childish nature helped Turk, Kelso, Elliot, and Cox be funnier. This formula seems to be the success for Silicon Valley. Richard plays a bumbling nerd who has borderline Asperberger's (the farmer in last week's "Articles of Incorporation" even joked about that) who is tough to watch. A friend of mine asked me a few weeks ago why anti-heroes are so popular in television and mainstream, and Silicon Valley shows us why. We're so insecure in our own life, that we don't want to see the same thing on the screen. We use television for escapism, and we want to see the characters act out our inner most fantasies. That's why it can be nails-on-a-chalkboard frustrating to see Silicon Valley's main protagonist, Richard, be so cliche nerdy. But this archetype can work to help accentuate the supporting players around him, in this case played by T.J. Miller, Kumail Nanjiani, and Martin Short. All three are incredibly funny people, and their comedy stylings can be enjoyed more when compared to the straight man Richard. That's what made "Articles of Incorporation" so funny last week, and that's what made 'Fiduciary Duties" work this week, albeit to a lesser extent. "Duties" gives more power to T.J. Miller's Erlich by making him a board member of Pied Piper, and thereby increasing Miller's screen time. Erlich is also by far and away the most outgoing and social out of any member of this main cast, and giving Erlich and the comedy of T.J. Miller a chance to shine is always a plus.

The Mindy Project (FOX), Episode 21 "The Girl Next Door"
GRADE: A

Brief Description: The Mindy Project probably has the best collection of comedic talent  in TV on the planet. Mindy Kaling worked at NBC and The Office for so long, that the show is able to employ some great talent, including Emmy winners Jack Burditt and Tracey Wigfield, who both won Emmys for their work on 30 Rock. "The Girl Next Door" was in fact co-written by Wigfield (and she has a small role in the show playing Peter's brain surgeon gal pal). The reason I bring all this up is because "The Girl Next Door" feels very much like a 30 Rock episode, and I mean that in the best way possible. 30 Rock was never a show that truly dealt with character development, but succeeded because they crammed the most amount of jokes into an episode that they possibly could. Not a lot happens in "The Girl Next Door", even if it does seem to lead us back into the Mindy/Danny relationship again, but works because it's just so damn funny. Plus, having the B story line focused so heavily on Adam Pally's character really helped the comedy as well, considering he's the true MVP of the show.

Brief Description: I watched The Mindy Project's "The Girl Next Door" before I saw "Dance", so I was really in the mood to laugh. The Mindy Project was the delightful opening act, and New Girl was the headliner set to make me roll on the floor laughing. Instead all I got was disappointment. New Girl was never a show that had me laughing all the time, but it still made me laugh. If I'm not laughing, then the FOX comedy should at least made me enjoy spending time in these characters lives. I've come to terms that Winston will never be a fully formed character, and that Coach will never be as good as he was in the pilot episode, but I should still enjoy spending time with Nick, Jess, and Schmidt. Nick and Jess are still broken up (for now) and Schmidt and CeCe are still broken up (for now), but "Dance" doesn't truly address either relationship. I didn't expect the show to delve deeper into CeCe and Schmidt until they get to Season 4, but the show could have at least given me some nuggets about how Jess and Nick are still handling things. Instead, all we got was Schmidt, Nick, and Winston doing CRAAAAAZY antics that weren't even all that funny, and frankly, made me confused into how this was even a lead up into the Season 3 finale which will air next week.

Brief Description: I wrote last week how I wasn't very fond of  Episode 2's "The Rooster Prince". However, the episode was necessary (and that was of course obvious as the time) to set up the rest of the short season. Now that we know who all the players are and how they relate to each other, Fargo is finally able to delve into the action. And boy howdy did it delve. We got a full slate of all the menacing things Lorne Malvo (Billy Bob Thorton) is capable of doing. We also got a heavy dose of Deputy Solverson (Allison Tolman) without her being annoying or irritating like she was in last week's episode. She definitely doesn't have the same kind of smarts as the Marge Gunderson character had in the movie, but she's still a damn fine cop as she continues to get evidence of Lester Nygard's (Martin Freeman) involvement of the events that happened towards the end of the first episode. By having the episode focus on Malvo, Lester, and Deputy Solverson with almost all the secondary characters getting their chance to shine in small doses, "A Muddy Road" shows us that Fargo can be a great mini series without relying on the audience's fondness and reverence for the movie.

Brief Description: Last week I wrote about how Season 2 started off with such a bang. It didn't bother itself with any love triangles or silly plot twists or anything that resembled a superhero show on the CW network. It was just a super hero show that happen to air on the CW network. Clearly I spoke too soon. Because right after I saw the first 3 episode of the new season last week, I binge watched the show. And binge watching a CW show shines an ever brighter light on the flaws it has. Arrow is more suited for a network like FOX, and if it went really bold, a network like AMC or FX. But it's not, and I'll just have to accept that. Maybe one day.

Brief Description: I know I'm extremely late to the bandwagon, but I'm a fan of football ("Street, do you think God likes football?" "Everybody likes football") and I'm a fan of good television programs, so Friday Night Lights seems just up my alley. I'm actually a big fan of full length movie Peter Berg directed of the same name, and I like what Berg did with the pilot of the TV show. There's always been a bunch of things already written about the show, so I won't go into too much detail, but I will say this: Any show that claims its star quarterback is so good that he'll be the best quarterback Notre Dame will ever see and will be better than Peyton Manning while at the same time spending SO much time with the back up quarterback is just telling the audience that something is going to go wrong with the star quarterback. It's still a gut wrenching moment when Street goes down, but FNL still follows sports cliches from the get go. I expect the show to create new ones as the series goes along. 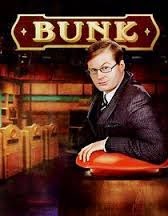 Brief Description: Bunk is a fake game show that aired on IFC that I just happened to stumble on, and it's hilarious. Hosted by comedian Kurt Braunohler, the show is basically just a platform for really funny people like Bobby Moynihan, Kumail Nanjiani, and Thomas Lennon to show what masters of improvisation there are. My only problem is that the game show follows the EXACT same formula and even steals from the same made up games late in the season as it did at the beginning of the season, but it's also a fake game show from the IFC network, so my expectations were unfairly high.


WHAT IS YOUR FAVORITE SHOW, CURRENT OR OTHERWISE, THAT YOU'RE WATCHING RIGHT NOW?