Brief Description: HBO has consistently refused to air episodes during the Memorial Day break, so there's no Game of Thrones or Silicon Valley this week. That's perfect, because it will give me more time to discuss Mad Men, both Sunday's episode and the season as a whole. First, the good with "Waterloo"

"No man has ever come back from leave, not even Napoleon. He staged a coup, but he still ended back on that island." -Bert Cooper-

For some reason other TV critics have been using "Bravo" as the Bert Cooper line to describe "Waterloo." While Bertram Cooper's last Mad Men was an excellent episode with some lovely parting words (and a weird as hell song in the end. I don't care what everyone else says, that song was out of place and not right), this show has always been about Don Draper. As much as we want to make it about Peggy Olson, we still compare her amazing Burger Chef speech to the one Don Draper gave during "The Wheel". Don's marriage has officially ended (although we all know that wouldn't last. "Does she know you only like the beginnings of things!") but his professional career in New York is thriving, alive, and well. For now. This will only end one way for Don Draper, and it won't be good. Whether you want to Sunday's episode a "mid season finale" or the end of Mad Men in 2014, we'll just have to wait one more year to see how this incredible show ends and how the 1960's officially has affected everyone we love.

However, as great as "Waterloo" was, that doesn't make up for just a sub par season Mad Mad has had this year. The show ended on two excellent episodes, but that doesn't make up for the other average episodes in aired earlier in the year. The reason "Waterloo" and "The Strategy" worked so well was because it gave us character moments from the characters we actually wanted to see. Now Matthew Weiner has said the first half of every season is just meant to set up the second half, so maybe this first season will be good in the sense that Season 7b in 2015 will be amazing. However, you have to call a spade "a spade", and Season 7a was fine, but boring and dull at most points.

Brief Description: Another excellent episode of Fargo. Not only does Deputy Molly Solverson survive, but it was just a bullet that went clean through her spleen. As a rational TV viewer, I know she had to survive. But as an emotional one, her life was completely up in the air. That's what made Alison Tolman's interview with Grantland after last week's episode so frustrating as it ruined the experience just a tad of watching the show. Anyways, Fargo is at its best when it solely focuses around Lester, Malvo, and Molly and that's what Fargo did this week. Molvo is again a one-man wrecking ball destroying the entire Fargo crew, Lester lets out his inner wolf by pinning everything on his brother, and Molly figures everything out right before realizing that it's a revelation too late. With only three more episodes to go, I can't wait to see how Fargo ends. 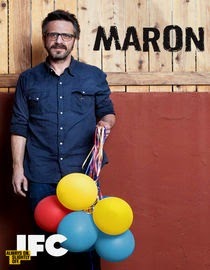 Brief Description: "Maron" often gets compared to "Louie" seeing as their both 'older' stand up comedians to happened to get famous later in life around the same time, and both have a TV show out right now. However, I think that's an unfair comparison. "Louie" tells stories, funny or not, whereas "Maron" is more like a straight sitcom. Plus, I'd rather watch Maron any day of the week. If anything, "Maron" is more like "Seinfeld" where Jerry Seinfeld would tell jokes on a stage, Marc Maron speaks into his podcast microphone. It's "Seinfeld" for the 2010's. Now that's not to say "Maron" is even close to "Seinfeld" in terms of both comedy and overall greatness, but just in terms of style and episode structure. Either way, I laughed a handful of times throughout "Mom Situation," which is all you can really ask for out of a sitcom.

Brief Description: TV critics seem to absolutely love "Review with Forrest MacNeil". Alan Sepinwall from Hitfix, The A.V. Club, and Vulture among many others all can't stop raving about it. Comedy Central has been on a crazy good run of late with Key & Peele and Broad City and the reviews of Review had been so great that I expected to fall in love with the show. The premise of this Comedy Central/Andy Daly vehicle is that Forrest MacNeil (Daly) is a reviewer on life. People request things for MacNeil to review, such as Racism, Going to Prom, and Divorce. And MacNeil does it, no questions asked. What's intended to be a great commentary on human nature (which it probably is) turns out to be a depressingly, unfunny show of the whitest man alive ruining his life. Without hyperbole, I didn't laugh once in the 3 episodes I watched.

Brief Description: In my attempt to catch up of all the best television eligible for the 2014 Primetime Emmy's, I decided to catch up on Masters of Sex. After watching the first three episodes, I'm not impressed. The show I'd most compare it to is Mad Men (at least in its later years), and that's not a compliment. Despite the obvious period piece connections, it's a show that looks great, but is ultimately hollow. It's surprisingly plot driven considering nothing happens. With Mad Men, when nothing happens it still can remain interesting because it's about characters being influenced by the world around them. With Masters of Sex, its mostly philosophical debates about the taboo sex of sex during the 1950's, and that debate can only go so far on a weekly television series.

Brief Description: I can't imagine anyone at CBS, or anyone in general, expected anyone to binge watch The Good Wife. Needless to say I watched 23 episodes within the span of two weeks. It's a good show, and I clearly like it, and I can see how it was nominated for a crap ton of Emmy's its first year. However, ti will never be as good as Breaking Bad, or Mad Men, or even Homeland's first season. The highest level The Good Wife will ever reach is something like that of House. It's pretty good, but not great. The "case of the week" nature of the show will keep the ceiling of this show low, but by focusing on a core group of centralized (and extremely interesting) characters, The Good Wife is able to overcome to shlock of shows like, say, Castle.


WHAT'S YOUR FAVORITE SHOW, CURRENT OR OTHERWISE, THAT YOU'RE WATCHING RIGHT NOW?