Fantasy Rock Band: How Would You Create The Best Rock and Roll Band Of All Time?

Relix recently posted an article entitled "What If You Had $25 to Start a Rock Band". Analogous to fantasy football or fantasy baseball, Relix gives you prices for different guitarists, drummers, frontmen, etc and you have to form the Greatest Rock Band ever. The reason I love this article is because I've had this discussion with my friends many-a-times, and I'm sure you have to. While I've never given "prices" when having these discussions, it's excellent conversation fodder to discuss the greatest rock and roll band of all time and the greatest musicians of all time.

However, the reason this Relix article is so good is because it created actual confines as you have an actual budget to work with. This article combines the realistic workings of fantasy football and baseball with the ability to create the ultimate rock band. I like that you can't just choose "the best" at each "position". If your fantasy football team had Adrian Peterson, Peyton Manning, Calvin Johnson, and Jimmy Graham on it, you'd win every single year. Unfortunately, no team ever ends up that way thanks to the snake or auction draft you have beforehand. Relix created their own parameters by only giving you a $25 budget and by setting the prices of certain musicians so you couldn't pick "the best" at every spot. You have to choose five people to start your band: a Frontman, A Lead Guitarist, A Rhythm Guitarist, A Bassist, and a Drummer. Here's what the prices look like: (click to enlarge) 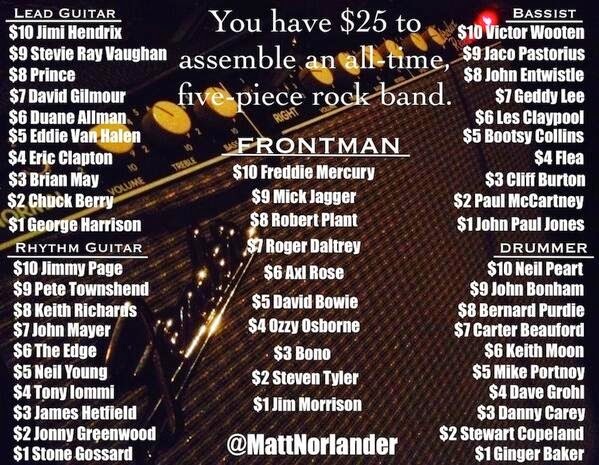 The top person at every "position" is worth $10; therefore, you just can't take "the best". If you can't take "the best" then how can you form the greatest rock band of all time? That's easy, like any fantasy draft, you have to look for value. Last year, Peyton Manning wasn't drafted as the best fantasy football player (I think he was the 3rd QB of the board in my league), yet he probably won you a fantasy championship. In fantasy baseball this year, Nelson Cruz is playing like a first round talent, but was ranked as the 139th best player coming into the season. You need to find value within this system, let's try and do that.

Here is Rolling Stones Top Ten List for each "position":

Here is a list of Digital Dream Door's Top Ten List at every "position". If you have never visited digitaldreamdoor.com you have to. They rank everything related to movies and music, and they have the best collection of experts and mainstream theory when they create their lists. Consistently, they have the best lists around. Even if you disagree with certain selections, their range of talent always seems to be correct.

Because this is my blog, and because I always have to rank EVERYTHING, here's how my own personal rankings would look like:

For the record, I've been playing drums for about 15 years now, and this list is based upon actual works I've tried to play and listened to.

So based upon these three rankings, here are some of the value picks:

- John Entwistle ($8): If you combine these three lists, there's a clear #1 pick at bassist, at that's The Who's John Entwistle. While he doesn't often end up at the #1 bassist, he would be the clear consensus #1 bass pick in any draft. He's currently third on Relix's list.

- Eric Clapton ($4): Clapton is easily the best value pick in this "draft". Myself and Rolling Stone lists Clapton as the second best guitarist of all time and Digital Dream Door ranks him 4th. Relix ranks him 7th best guitarists behind "unranked" guys like Prince, Stevie Ray Vaughn, and David Gilmour.

- Ginger Baker ($1): There's a lot of value to be had in the drummer section (I think a lot of that has to do with the Average Joe not knowing what to listen to when it comes to the drums), but I think the best value comes from Relix's 10th best drummer Ginger Baker. Rolling Stone (readers) as well as myself ranks Baker 7th best all time and Digital Dream Door ranks him 5th. He's definitely better than the 10th best drummer.

Here is how I constructed my rock band, and it's frankly the same way I construct my fantasy football team. Quarterbacks and running backs score most of the points, so I make sure I draft an elite QB and RB. Last year I drafted Peyton Manning as my QB and Doug Martin as my RB1. While Martin didn't work out so much, having the #1 points getter in fantasy propelled me the second place in the league. That's similar to how I created my fantasy rock band. When you think of famous bands throughout history, what musicians do you think of? The answer is the band's frontman and lead guitarist. A band could have the best drummer and bassist in the world, but if their lead guitarist and frontman stink, who cares? On the flip side, a band could have a great frontman and lead guitarist, and just a decent bassist and drummer, and they could still be huge. The Rolling Stones, Guns N Roses, Queen, and Black Sabbath are all basically constructed that way. When you think of rock bands throughout history, can you even name who that band's bassist or drummer is for 90% of the bands you think of? My guess is you can not. That's why I spent a lot of money to get my #1 guitarist and frontman and went cheap for my bassist, drummer, and rhythm guitarists. BTW, I have no idea who Stone Gossard is, but considering nobody creates a list of The Greatest Rhythm Guitarists of All Time, so choosing the least expensive guy was an easy decision. A rhythm guitarist can be almost anyone.

HOW WOULD YOU FANTASY ROCK AND ROLL BAND TURN OUT? WHICH MUSICIANS WOULD YOU DRAFT? LET US KNOW ON OUR FACEBOOK PAGE!