5 Worst TV Dads Of All Time

Father's Day is right around the corner. It's a day where we get Dad power tools and we mow the lawn for him. We love our Father and we should celebrate him. However, this list is full of guys that are the antithesis of your Dad. These are bad, bad fathers. We may love them as characters, but they're terrible for their children. So in "honor" of the holiday, here is a list of the 5 Worst TV Dads Of All Time:

Why He's A Terrible Father: They were plenty of terrible TV dads who star in FOX cartoons including Peter Griffin (Family Guy) and Stan Smith (American Dad), but not only is Homer Simpson the original, he's probably the worst. He's commits child abuse in every other episode by constantly choking Bart and he's so mentally incompetent that he's just incapable of fostering a nurturing environment for his daughter Lisa. In fact, without Marge around, the Evergreen Terrance house would literally be filled to capacity with garbage, that his kids would realistically be taken away from him. Don't get me wrong, I personally love Homer Simpson as a cartoon character, but I would never, ever, ever want him to be my father.

Why He's A Terrible Father: The proof is in the pudding, and the pudding is George Constanza. George has so many problems in his life, problems with holding down either a job or a relationship, that can all be traced back to his father. Just take the holiday Frank made up, Festivus, as examples A-Z. Not only is there a portion of the holiday where you bluntly air out all of your grievances, but you can't do anything until the Feat of Strength is proven- which mainly means Frank wrestling his son to the ground. If you ever want to scar your child emotionally for the rest of his or her life, just read the playbook created by Frank Costanza.

Why He's A Terrible Father: There is nothing Tywin Lannister won't do in order to make sure he's the most powerful man in Westeros, and that includes pimping out his daughter so she's the Beard of a Tyrell so he can have money and his son Tyrion to poor Sansa Stark just so the Lannisters can guarantee control of the North. Tywin's children are his literal pawns on his Westerosi chess board. He overtly despises his youngest son Tyrion and blames him for the death of his wife (she died while giving birth to Tyrion) and will do everything he can to sentence him to death, unless that of course means that keeping him alive can somehow work to his advantage. Tywin constantly preaches family first, which is not only ironic, but doing so forces Jamie and Cercei to actually fall in love with each other and fornicate. The Lannisters are some of the worst people Westeros has ever seen, which that's difficult to accomplish, and that's all because of Tywin. 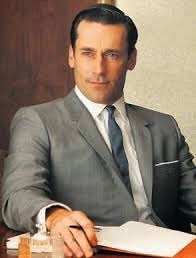 Why He's A Terrible Father: His daughter Sally always disliked Don, but catching him having an affair with Slyvia was the last straw. When Sally prefers the Ice Queen Betty to you, you've done something unforgivable. Don constantly lies to his children under the guise of protecting them, but it's really just to protect his own self interest. And Don Draper does whatever he wants to. In Season 1, when Don was supposed to leave Sally's birthday party to get a cake, he instead just drives away leaving his daughter and the entire party behind just because that's what he wants to. If Don Draper wants to drink and watch a movie in the middle of the day, he'll do it, children's well-being be damned. Sure, he spends time with his kids, but only when he has to. And just because he'll spend time with them, doesn't mean he'll do age appropriate things with them. Don is so selfish that he'll do whatever he wants to, which turns bleeds over to his relationship with his kids. Don Draper is a terrible and miserable S.O.B. which also makes him a terrible and miserable father.

* Walter White (Breaking Bad): For 95% of the series run, Walt is a great father. He provides money for his family, he has a great relationship with Walt Jr. as their breakfast conversations are ones we'd want to have with our own father, he beats a kid up when that kid makes fun of his son's disability, and he really is a loving dad. Sure, he's a murdering meth kingpin, but he's still a great dad.

* Frank Reynolds (It's Always Sunny In Philadelphia): Frank is a terrible person, but so is everyone in It's Always Sunny, even those who aren't Frank's kids are pretty bad in some way. But outside of some pretty sleezy things, Frank will always bail out his kids when they get in trouble and he loves his kids and just wants to spend time with them. Plus, George Bluth Sr. is just like Frank Reynolds, but 100x worse.

* Raylan Givens (Justified): The show doesn't overtly make Raylan a bad father, but his actions still prove that he is. He has a baby girl who lives in Florida that he never sees and he rarely Skypes to see her. He talks about making plans to see her, but he never does. Raylan is the worst kind of absentee father, and his daughter is only going to know stories about him versus who he actually is as a person.

* Walt Miller (New Girl): Nick Miller's father Walt (played by Dennis Farina) is a con man who cares about his bottom line versus his kids. He constantly uses his children to help with his scams and that in turn made Nick the neurotic mess you see before you.

* Aaron Echolls (Veronica Mars): Years of child abuse is nothing when you drive your son's mother away while sleeping with your son's girlfriend before eventually killing her.

WHO DO YOU THINK IS THE WORST TV DAD OF ALL TIME? LET US KNOW ON OUR FACEBOOK PAGE!