Why It (Sort Of) Makes Sense To Trade Away Brandon Marshall 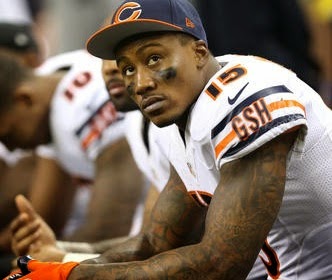 According to the Chicago Tribune, the Chicago Bears are actively shopping wide receiver Brandon Marshall. As a lifelong Chicago Bears fan, I’m very upset by this news. Brandon Marshall is arguably the greatest receiver in the franchise’s history (from both the numbers he put up in his limited time here and from a pure skills standpoint, I dare you to name someone better) and when healthy, he’s one of the best receivers in the game. Plus, it’s just fun to scream MAHHHHHH-SHHHHHHAAAAALLLL every time he does something excellent. But from the Bears perspective and a GM perspective, it makes sense why they’d want to trade him.

The big reason to trade away Brandon Marshall is that he’s decently expensive. It’s almost the exact same reason the Philadelphia Eagles traded away LeSean McCoy. Marshall is currently under contract for the next three years, and he earns an average of $10 million a year. That makes him (on a yearly average) the 9th most expensive wide out in the game. That’s extremely fair and market price considering Marshall’s skill set and considering his production during his tenure in Chicago, but also not exactly cheap either. According to OverTheCap.com, Brandon Marshall is set to cost a little over $9.5 million against the cap in 2015, a little under ten million dollars in 2016, and about $10.375 million dollars in 2017. While that’s not a ginormous, Jay Cutler-in-2014 chunk of change, it is still a decent amount of money that will come off of the books. And speaking of Jay Cutler, his contract nose dives over the next few years as his contract was extremely frontloaded. The Bears will save another two million from this year compared to last just the way Cutler’s contract is structured. I bring this up because the Bears will have a guaranteed $11.5 million freed up in 2015 based upon two players alone. That may not be enough to go out and get Ndamukong Suh, but it should be enough to get stud offensive lineman Mike Iupati or Orlando Franklin or a stud defender like CB Byron Maxwell, DB Devin McCourty, or DT Nick Fairley. I would love for the Bears to get help on their back seven on defense as they have had historically bad defenses the past two years, and trading away Marshall will help improve the defense. I contend the Bears have a few good pieces on defense currently on their roster, and a stud free agent acquisition and their 7th overall pick in conjunction with the coaching of the excellent John Fox could easily be enough to bring the Bears to a respectable place on defense and therefore an above average team.

Further, trading away Brandon Marshall doesn’t hurt the Chicago Bears offense that much. It of course will be a downgrade not having one of the best wide receivers in the game suit up for you, but it’s not catastrophic either. Second round draft pick Alshon Jeffrey has emerged as a legitimate #1 wide receiver and if Marshall leaves it will be like when the Indianapolis Colts moved on from Marvin Harrison while still having Reggie Wayne. The Bears also have one of the best pass catching tight ends in the game with Martellus Bennett. Wide out Marquess Wilson is a prospect that the Bears have been very high on in recent years, and he finally got playing time at the end of the 2014 season once Brandon Marshall had season ending surgery. If Wilson can emerge the same way Jeffrey did and the same way the Bears hope he can, then the Bears offense can most certainly live without Brandon Marshall.

Speaking of Brandon Marshall and his injuries, there’s a chance that he’s not fully healthy or the Bears don’t think he can remain healthy over the course of his contract. Obviously, this is pure speculation, but Brandon Marshall clearly did not look healthy all season long before his season ending rib cracking injury. Brandon Marshall will be 31 years old heading into the 2015 season and has had his share of dings and bruises along the way. When healthy, Brandon Marshall is a beast, but if he’s not as evidenced by his 2014 campaign, he’s a tall decoy at best.

I’m content (certainly not happy, but content) if the Bears do trade away Brandon Marshall, but getting a second round draft pick in return seems like a no-brainer. The reports that the Bears are looking for a "mid-round pick" is distressing to me, because a wide receiver of his caliber on a fair contract should fetch at least a second rounder. If the Bears get  something less, then either Marshall’s hurt / the injury concerns surrounding him are true (in which case it’s good to trade him) or teams believe the Bears will straight up drop Marshall if there’s no trade partners in which case that doesn’t speak highly of new GM Ryan Pace, and frankly it might be beneficial to keep Marshall if he’s being shipped out below market value.

Lastly, I want to address Jay Cutler, because frankly I’m not legally allowed to discuss the Chicago Bears on a National level without discussing Jay Cutler. And also, when talking to my co-workers and friends on Facebook about trading away Marshall for cap space, I have gotten “That’s dumb, they should just trade away Jay Cutler instead!”. To that I have to say: a) trading away Marshall doesn’t mean the Bears can’t trade Cutler as well b) we have no idea what the actual market for Jay Cutler is and c) if you think Jay Cutler is bad, wait until you see his possible replacements. 2015’s crop of QB free agents might be the worst in the history of the NFL (or at least in recent memory). For that reason alone I personally advocate that the Bears stick with Cutler- at least for the short term. Further, if the reports from a few months ago are true and that the Bears will need to give up draft picks in order to unload Cutler (albeit reports I never truly believed in the first place), then it doesn’t make financial or football sense to trade away Jay Cutler. It also seems like the Bears are going to keep Jay Cutler, again at least for the short term, which makes Marshall that much more expendable.

In the end, I understand why the Chicago Bears are actively looking to trade Brandon Marshall. I don’t personally like it and I loved watching him play, but I get it. The Bears are in too rough of a shape not to leverage Marshall for better players elsewhere and his loss is easily manageable.

WHAT ARE YOUR THOUGHTS ON THE POSSIBILITY OF THE CHICAGO BEARS TRADING AWAY BRANDON MARSHALL?