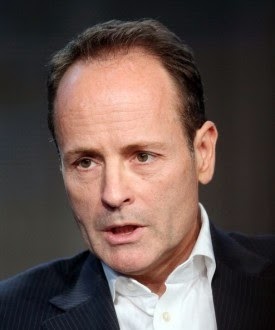 On Wednesday April 9, 2014, John Landgraf (left), the CEO of the FX Network, told Deadline.com that HBO allowing True Detective to enter the Emmy race as a Drama Series as opposed to a Mini Series is "unfair". Current Emmy rules says that shows like True Detective (and FX's American Horror Story for that matter) can choose which category they fall into, because they can qualify in either. Landgraf also goes on to complain that shows like Shameless and Orange Is The New Black should not be eligible in the Comedy Series categories, because they are an hour long, as opposed to the normal 30 minute sitcom.

I encourage you all to check out the interview as Landgraf makes some interesting points, mainly that the only reason True Detective can get huge stars like Matthew McConaughey and Woody Harrelson is precisely BECAUSE it's a mini series with a limited schedule, but truthfully, Landgraf just comes across as whiny. The Deadline article paints Landgraf in such a light that he sounds like a toddler who's just been told he has to go into Time Out.

I can understand why Landgraf would be upset at HBO and the Emmy's. Landgraf is one of the first people to realize television is going in the direction of mini series as opposed to television shows, and lost in a bidding war with HBO to earn the rights to True Detective. Landgraf also has an excellent business model (at least in theory) that in order to compete in today's over saturated marketplace that is television, you need to produce the best television shows possible. FX has the best shows on the air including: Justified, Sons of Anarchy, Archer, The League, American Horror Story, It's Always Sunny in Philadelphia, Louie and The Americans. Over the past few years, it's aired incredible series that unfortunately no one watched like Lights Out and Terriers. FX consistently creates great show after great show, yet gets no love from the Emmy's.

One of the best shows currently on television is FX's Justified. While it's had some up and down seasons, Justified's second and fourth seasons were incredible and the best of that respected year. Yet the show has never even been nominated for Outstanding Drama Series at the Emmy's. The only two Emmy's the show has ever won was Best Supporting Actress (Margo Martindale for her incredible role as Mags Bennett during Season 2) and Jeremy Davies won Best Guest Actor in a Drama during Season 3. And that's it. The show, and frankly the network, deserve better- especially in the Drama categories.

But that being said, it seems pretty hypocritical for Landgraf to complain about other network's screwing with Emmy rules when he's the biggest offender of them all. FX's American Horror Story nominates itself as a mini series rather than a TV show. As a result, it's been nominated and won multiple Primetime Emmy's including Best Mini Series or Movie and Best Actress (Jessica Lange)- Emmy's the show most certainly would not have won (or even been nominated for) had it chosen to enter itself as a TV series versus a mini series. While Landgraf may personally feel that AHS is a mini series and that's why he chooses to throw the show into that ring, others most certainly disagree with him. While AHS may not be a traditional TV show nor a traditional mini series, the show follows the same actors across multiple seasons. It certainly feels more like a TV show than a mini series, and The Internet agrees.

I think Landgraf has a point in certain areas, and he has a right to feel upset, but I do not think the Emmy rules need to be stricter. I do agree that True Detective is 100% a mini series, and it is not a TV show. Unlike American Horror Story, it will not follow the same actors across multiple seasons, and Landgraf is correct is that solely because the HBO show is a mini series, it was able to get huge A-list stars. Plus, HBO admits that the only reason they didn't nominate the show in the mini series Emmy categories was because basically it felt like the inferior categories. But c'est la vie. The same loophole that allows American Horror Story to earn so many nominations is the same loop hole that will probably earn True Detective multiple nominations (although no nomination is guaranteed for the show).


DO YOU THINK THE EMMY'S SHOULD CREATE STRICTER GUIDELINES SO SHOWS LIKE TRUE DETECTIVE AND AMERICAN HORROR STORY GET "PROPERLY CATEGORIZED"?