When Did Tracy Jordan EGOT?

During Season 4 of the NBC sitcom "30 Rock", Tracy Jordan (Tracy Morgan) bought a gold chain with the words "EGOT". EGOT means "Emmy" "Grammy" "Oscar" and "Tony"- the four major awards a person can try to win in a lifetime. Tracy Jordan buys this gold chain and then tries to win all four awards. Lo and behold, about a year later in Season 5, Tracy Jordan EGOT's. The problem is, the show never explains how Tracy Jordan EGOT's. I asked Hitfix.com's TV critic, and the man who memorizes EVERYTHING TV, Alan Sepinwall how Tracy Jordan EGOT'd, and even he doesn't know. Just coincidentally I'm re-binge watching "30 Rock" and I still don't quite know. Here is the information I can gather:

While Tracy Jordan does spend the entire run of "30 Rock" on a television program, I do find it dubious that he actually won for his work on "TGS with Tracy Jordan". While technically I think he would have been eligible for his work on a sketch comedy show for part of TGS' run (Amy Poehler received a nomination for her work on SNL in 2008 and for the longest time, sketch comedy shows like SNL and TGS weren't eligible for Primetime Emmys), "30 Rock" doesn't paint TGS out to be a good, quality show. Outside of Jack Donaghy (Alec Baldwin) constantly criticizing it, most people not affiliated with the show make TGS out to be a joke.

However, there's a bunch of Emmys outside of the Primetime Emmys. Whoopi Goldberg and EGOT winner has a Daytime Emmy. Recent EGOT winner and songwriter Robert Lopez won his Emmy for his work on a children's show. Tracy Jordan has been working in television since he was a kid. It doesn't sound all that difficult to get at least a Daytime Emmy nomination when you work as long as Tracy Jordan has.

I think the other option is that Tracy won a random Emmy category like Outstanding Guest Actor in a TV Series. Three of Mel Brook's 4 Emmy wins are for guest starring on Mad About You. Tina Fey won a Emmy for her work as Sarah Palin on SNL. Betty White has an Emmy for hosting SNL. Frankly, if you hosted SNL or have guest starred on 30 Rock in the past 7 years, you received an Outstanding Guest Actor/Actress in a Comedy Series nomination. I find it hard to believe that a star as big as Tracy Jordan couldn't have done that. 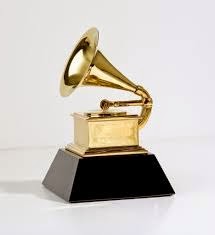 This is a category 30 Rock doesn't even remotely attempt to explain. At least with Tracy Jordan and his Emmy, you could theorize that because he's on a TV show, he got an Emmy for it (Although clearly I went above and beyond). With a Grammy, who knows. While clearly Tracy Jordan can't sing worth a damn, he did put out a novelty song, "Ware Wolf Bar Mitzvah." However, there has never been a Best Novelty Song category, and as bad as some Grammy nominations have been in the past, they'd never be so terrible to nominate a novelty song. A comedy album on the other hand? Happens all the time.

This is the only award "30 Rock" actually showed Tracy Jordan winning.

The very first thing Tracy Jordan does after purchasing his EGOT necklace is to try and win a Tony. Jordan rents out a theater in New York and "performs" a one act play. He just rambles and makes stuff up for 5 hours and the critics love it. Jenna  Maroney then tells Tracy Jordan he needs to perform his one act play a minimum of 4 more times to be Tony eligible. At the end of the episode, Jenna appears to have helped him. Plus, "30 Rock" never mentions Tracy Jordan doing a play ever again.

While I think it's safe to assume that Tracy Jordan won a Tony for his work for this one act play, the biggest hurdle that needs to be overcome is what category would Tracy Jordan even be eligible for, nevertheless win? I assumed there would be a special one-act play category or something of similar ilk, but none exists. There are only two categories Tracy Jordan would even be eligible for, and that's Best Play and Best Lead Actor in a Play. Truthfully, I can't imagine that anyone with the past 30 years has won a Tony for their work in a one act play, but I guess Tracy Jordan is an exception.


If You Think You Know How Tracy Jordan EGOT'd, let us know on our Facebook page!