7 Reasons Why Wrigley Field Is The Worst Stadium In Baseball

I'll fully admit that I am a White Sox fan writing this post, but I'm also not one of those White Sox fans that hates the Cubs either. I don't understand the rivalry between the North Siders and the South Siders seeing as they neither play in the same division or the same league, and I'm normally not on board with the Cubs bashing that White Sox fans tend to do. However, I've been to two Cubs games within the past 10 days (I got free tickets to one game and the second game was for a friend's bachelor party) and both were at Wrigley Field, and I can tell you from first hand experience how terrible Wrigley Field is. Cubs fans will tell you that any "problems" with the stadium is because it's classic and a tradition, but in reality, it's just old and outdated. Don't get me wrong, there are some excellent qualities to Wrigley Field including The Ivy, they serve one of my favorite beers (312) for only 50 cents more than a Bud Light, and the stadium faces the correct direction so it has that fantastic Chicago skyline in the background (something U.S. Cellular stupidly doesn't do). However, objectively speaking, as a whole, Wrigley Field is terrible and it has the worst stadium in baseball. 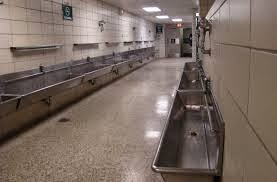 Ladies, you don't have to worry about this, but trust me, this is a problem for guys. I don't expect *that* much privacy when I go to the bathroom at a baseball game, but I do expect at least some sort of barrier between myself and my urination buddy next to me. You see, at Wrigley Field, there are no individual urinals that guys can urinate into, it's just one giant sink stapled to the wall as you can see from the picture above. It's nice to know the same system guys relieve themselves is the same way we feed horses.What's even worse, is that Wrigley Field is actually renovating their bathrooms, and they have no plans to remove the piss throughs.

Because Wrigley Field sits in the middle of Wrigleyville (duh!) and it literally sits next to residential apartments and condos, the Chicago Cubs are limited to the amount of home night games they can play. Granted, this continues to change, but because the game itself is so loud and there's drinking afterwards, the residents of Wrigleyville would prefer to have the game played while their at work.* The problem arises is that the rest of Chicago is also at work during these day games, meaning if you want to see a Chicago Cubs game, you either need to take time off of work or see them on the weekend. This is especially problematic for season ticket holders. Fans of other baseball clubs often get to enjoy seeing their team play after work, but not Cubs fans.

Having so few night games isn't also a problem for the fans, but also for the players as well. Boston Red Sox DH David Ortiz claims so many day games is a contributing factor to why the Cubs constantly lose. His theory, after talking to many Cubs players, is that it is difficult to adjust to playing night games when you go out on the road, especially night games on the West Coat. He says that your body is so used to playing day games, that you have trouble adjusting when you have to play at night on the road. BTW, former Cubs great Kerry Wood agrees with Big Papi.

* For the record, I side with the Cubs and Cubs fans on this issue. I have no sympathy for residents of Wrigleyville. You knew exactly what you were getting into when you decided to live in Wrigleyville. It's not like the stadium just popped out of nowhere. Stop complaining and move to Lakeview like a normal Chicagoan.

The new Dallas Cowboys stadium has a high definition television screen that stretches from the 20 yard line on each side. The Jacksonville Jaguars just announced for its upcoming season that it added a video screen to its stadium that's even bigger than what the Cowboys have. In fact, in 2014, almost every single baseball stadium has some sort of electronic video TV screen so you can re-watch highlights of what just happened or you can watch the field if you have terrible seats. But do you know what Wrigley Field has? This: 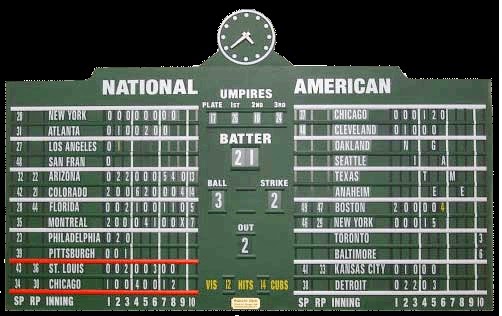 That's right, Wrigley Field has a manual version of the ESPN SportsCenter app in the middle of their stadium. Back in the early 1900's, if you wanted to know the scores of other baseball teams you had to listen to the radio, chose the correct radio station, and then wait until the announcer said all of the baseball scores. So when this scoreboard was first introduced, it was amazing for baseball fans and Wrigley Field patrons. However, in 2014, it's a terrible, terrible idea. Not only can you get all of this information on your mobile phone if you really wanted it, but it takes away from having an awesome video scoreboard.

By the way, I'm not the only one who believes it's silly that Wrigley doesn't have an electronic scoreboard and screen. Do you know who else thinks it's silly? The Rickets Family and owners of the Chicago Cubs. That's why in their recently proposed renovations, they added a nice, huge video screen out in both left and right field. This should be a no-brainer decision to add in these new-fangled 21st century electronics; however, not only are rooftop owners unhappy about this decision, so are everyday Wrigleyville residents. This is just further proof about why Wrigley is terrible.

This is just a personal observation I noticed when I attended Cubs games at Wrigley Field recently. For starters, there is always a huge line (although it would be more appropriate if I stated there is one giant huddled mess of a crowd) in order to get in. And this wasn't a scenario where the gates first opened and there's a long line of people who have been patiently waiting to get in; I arrived to the stadium about half an hour to an hour before first pitch and it was still a mess.

But once you manage to push your way through the crowd and you get inside, you're faced with an even bigger mess. Because this stadium was built 100 years ago, the layout inside isn't the greatest. Now there will always be crowds and confusions whenever you enter a baseball stadium, but Wrigley Field was the worst layout I've ever been into.

Lastly, it's a bitch and half trying to leave the game. With a stadium like U.S. Cellular, there are separate entrances, exits, and walkways to get from the parking lot to your seat than from your seat to go back into the parking lot. This system helps avoid congestion. However, that's not the case with Wrigley Field. The entrances and exits are all the same, so when you have an entire stadium full of people trying to leave at once, it's like someone had yelled "fire" in a crowded movie theater. If you need to to use the bathroom before you leave Wrigley, then best of luck to you. Let's hope crew members find your body the next morning. You'd think this wouldn't be a problem considering how much Wrigley Field patrons are known for imbibing their alcohol, but you'd be wrong. Anyways, the entire layout is a mess.

If you want to go to a Cubs game, then you better take The Red Line in, because Wrigley Field does not have any parking lots, and it's a terrible idea to try and find a parking space in the middle of the city. Plus, Wrigley Field sits in the middle of Clark and Addison, which is not right off of highway like most baseball stadiums. However, Wrigley isn't the only stadium in a bad location. Not having a parking lot is bad, but it's not the worst thing in the world when it comes to getting and staying at the game.

However, the real reason Wrigley Field not having a parking lot is terrible because you can't tailgate before the game. I have a friend who is a die-hard Cubs fans and went to a college in The City that didn't have a football team, so the first time he tailgated before a game was when he was in his mid-20's when I took him to a White Sox game. That's unacceptable. To not be able to fire up your grill, take out your Bags set, and crack open a beer before a baseball game is just un-American. I have no problem drinking before a baseball game, but if you don't do it with food and games it's just called "pre-gaming". Adults "tailgate", children "pre-game".

For those of you who don't think the Cubs' visiting locker room is a problem, then just listen to Tom Ricketts himself. The quality and conditions of the visiting players locker room (as well as the Cubs) are just atrocious. The visitors club house is the smallest in the majors and it has the worst amenities out of the 30 stadiums. There's no cafeteria, no work out station, and no video room. Players constantly complain about playing at Wrigley Field. The fact of the matter is that it's neither right nor fair for the Cubs to go on the road and enjoy the spoils of every other team's great visitor's clubhouse and then not return the favor. I'm confident even die-hard Cubs fans who hate that this list exists can at least agree to this point.

This was the view of the field from my seat at the game I attended last weekend: 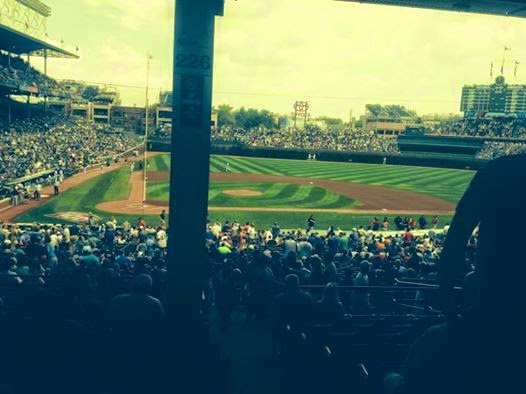 I don't care that when you purchase your ticket you're overtly told that you seat may have obstructed viewing, this shouldn't exist in the first place (and BTW, for me, these tickets were bought on my behalf so I didn't have a choice in the matter).

Now, in fairness to the Chicago Cubs and to Wrigley Field, the Ricketts family is trying to remedy many of these problems, The bathrooms are being renovated, they're fighting their hardest to add electronic video screens, and they're trying to raise money to fix their putrid locker rooms. But (a) these problems aren't solved yet and (b) many problems would still exist even if many renovations are made. Although if the renovations are made, I guess Wrigley Field would move up to 29th place, and the Tampa Bay Ray's Tropicana  Field would move into last place.

DO YOU AGREE THAT WRIGLEY FIELD IS THE WORST STADIUM IN BASEBALL? LET US KNOW ON OUR FACEBOOK PAGE!