Does Orange Is The New Black Have A Piper Problem?

Jenji Kohan’s show Orange Is The New Black is based off of Piper Kerman’s book of the same name. The show centers around Taylor Schilling’s Piper Chapman, who is obviously based upon Kerman herself. After three seasons, the first name to appear in the opening credits is Taylor Schilling and the first name to appear in the closing credits is “Executive Consultant Piper Kerman”. The entire first season is centered around Piper Chapman’s life, how she got into prison, the instances in her life that made her who she is today, and balancing life in prison with her old, outside life. While the show is truly an ensemble cast, Schilling’s Chapman is clearly the lead. Yet for as much as people love Orange Is The New Black, they can’t stop themselves from demanding a show without Piper Chapman.

This seems like an odd request to me, since the show itself very clearly told its audience who its star was. Yet as the seasons of the show progressed and as Kohan and crew developed as artists, they started fading Piper farther into the background, or rather, they realized what a deep bench they had and started to bring more and more players into the foreground. We got our fair share of interesting characters in the show’s first season, and we grew to love those characters more and more as the show progressed. Eventually, the show phased out characters like Larry (Jason Biggs) and Polly (Maria Dizzia), characters who only existed to show Piper’s life outside of the Litchfield prison and started focusing on the more interesting characters and cliques and prison guards within the system. Season 4 will focus on even more characters as the amount of prisoners doubled plus the addition of Blair Brown’s Martha Stewart/Paula Dean amalgam Judy King, making even more sense to write off Piper Chapman completely.

Initially, I was very opposed to the idea of Orange writing off Piper. Television has had a long and storied history of removing its lead and becoming a poorer show as a result. Most recently, The Office, which was already going downhill to begin with, went into the crapper after Steve Carell left. Two and a Half Men, which not the greatest show to begin with, was still significantly diminished once Charlie Sheen was replaced by Ashton Kutcher. Despite reports to the contrary, Piper Chapman was still the lead of her show, and you can’t remove your lead character.

Then something eye-opening occurred (at least for me). Zooey Deschanel took a sabbatical from her show New Girl as a result of her pregnancy and the show briefly replaced her with Megan Fox. I thought this would work to disastrous results, but the show ended up having its best six week stretch in a long time. While the show was based upon Deschanel’s character and was picked up by FOX thanks to her involvement with the show, Deschanel’s character Jessica Day was actually a supporting character. As New Girl went along, initial supporting characters like Nick Miller (Jake Johnson) and Schmidt (Max Greenfield) became the true co-leads of the show which relegated Jess to co-star status. So when Deschanel briefly left the show, it allowed the true co-leads Nick and Schmidt to really shine without having Jessica and whatever her potential storyline of the week would have been to drag the show down. 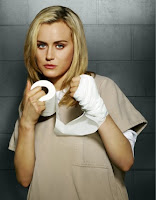 Obviously, Orange Is The New Black can succeed very well on its own without Piper Chapman. As the show has relegated her to co-star status and elevated many, many other players up to Piper’s level, it is not difficult to imagine a show without Piper Chapman. To some people, that would be ideal and we would get to focus on other more interesting and less developed inmates and Suits. Just as New Girl survived and flourished without Zooey Deschanel, so can Orange Is The New Black without Taylor Schilling’s Piper.

While it seems relatively simple to have a show without Piper- the character received a decently small sentence of only 18 months and it wouldn’t be unrealistic of the show to release her early or get her sent to Maximum Security, a place where no character has come back from- Orange Is The New Black is not going to completely write her off of the show. The complaints about Piper as a character have been there since Season 1. As a slight F.U. to the fans, the very first episode of Season 2 is solely about Piper and we don’t even see anyone else until Episode 2. The fact remains, this is a show about Piper Chapman. No matter how loud the fans get, Piper just isn’t going anywhere.

Personally, I don’t really want Piper to go anywhere. I agree that she is less interesting than a lot of other characters, but she is certainly interesting in her own right. Orange delves deep into class relations, and Piper’s crusty upper-middle-class status is a part of that chain. Her status works as a nice dichotomy compared to the rest of the inmates. The fact that Piper was granted a day leave to visit her sick Grandmother while the rest of the inmates, mostly of Hispanic and African-American decent, weren’t granted the same opportunity for problems seemingly more severe than Piper’s is a pretty good representation of the complaints of our society as a whole. Part of the reason we hate Piper is because we hate White Entitlement, which is exactly the point. Further, Piper’s presence helps bolster your affinity for other characters like Taystee and Crazy Eyes. You can enjoy characters more when you can easily compare to a character you strongly dislike- like Piper.

I completely understand where the fans are coming from who do not like Piper. She is a purposefully unlikable character and that’s a steep hurdle for many fans to overcome. Her actions like sending Ruby Rose’s Stella to Max is a completely horrifying and unredeemable action. But the reason you hate Piper so much for that is because the show has forced you to connect emotionally with the character. Whether you like Piper or you hate her, you still have feelings for her. One of the worst sins a show can commit is by not forcing to create an emotional bond with its characters. Preacher is currently having that problem. If you’re demanding Piper off of the show, then Jenji Kohan has done her job.

At the end of the day, Piper will remain a part of the Orange Is The New Black family. While there’s nothing to suggest that the show can’t live in perpetuity forever, the show will most likely end on the day of Piper’s release. And while you can scream about this perceived Piper problem until you’re blue in the face, this is Jenji Kohan’s show and she’s going to do with it how she likes. She’s appeased the fans plenty by reducing Piper’s role on the show as well as the people in Piper’s life, but Piper herself is not going away. The sooner the fans accept that, the more they’ll be able to enjoy the greatness of the show.

WHAT ARE YOUR THOUGHTS ON PIPER CHAPMAN? DO YOU WANT ORANGE IS THE NEW BLACK TO WRITE HER OFF OF THE SHOW? LET US KNOW ON OUR FACEBOOK PAGE!