The Red Hot Chili Peppers Are Doing Just Fine Without John Frusciante: My Review of The Getaway 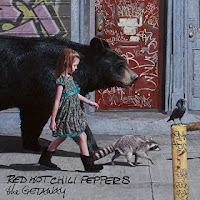 The world was ready for a great Red Hot Chili Peppers album, and the band, now in their fourth decade of making music, finally gave one to us. The band has a steady stream of popular, good, and enjoyable hits, but their albums have been up and down. For every Blood, Sugar, Sex, Magik and Californication is an I’m With You and One Hot Minute. The Getaway sturdily falls into the former category and is a must listen for even the casual Chili Peppers fans. It’s easily the band’s best albums since Stadium Arcadium- which was released a decade ago.

For the vast majority of the band’s run, the core has been lead singer and lyricist Anthony Kiedis, bassist Flea, and drummer Chad Smith- who just happens to be a doppelganger for Will Ferrell. For most of their albums, the band’s guitarist was John Frusciante, one of rock and roll’s greatest guitarist and the only one who could rival Jack White as the greatest guitarist of the era for latter Millennials. Without realizing it, Frusciante was the band’s soul. Kiedis and Flea brought the energy and the funk to the Red Hot Chili Peppers, and it’s their band, but John Frusciante built the foundation that allowed Kiedis and Flea to play on.

Because Kiedis is the bands’ frontman and because Flea has charisma out the wazoo, they were always deemed the quintessential Chili Peppers. Even if Chad Smith decided to leave the band tomorrow, Kiedis and Flea will still tour with whatever random session drummer and guitarist they want and they’ll still be the Red Hot Motherfucking Chili Peppers. Yet a lot of what made the Chili Peppers the band that they are and what has helped with their longevity is the musical acumen of John Frusciante. He will always be second banana in this band by the nature of the instrument he plays, which is a shame, because in reality he was always the band’s number one guy. Drugs and funk may have propelled the Peppers onto the scene, but John Frusciante helped keep them there thanks to entire albums like Mother’s Milk and Californication.

Although not always comfortable with the fame of being an amazing guitarist in a hit band, Frusciante has come and gone over the years. He was replaced with Dave Navarro for the band’s sixth studio album One Hot Minute. Navarro is an incredible guitarist and songwriter in his own right as we’ve seen throughout his career, but he wasn’t a good fit for the Chili Peppers. He brought too much rock and power chords to a band more suited for funk and the lack of clothes.

John Frusciante hasn’t always been with the band. He joined them for their fourth studio album, Mother’s Milk, and reinvigorated what could have been a one-note wonder. He joined the band after Hillel Slovak, the band’s guitarist on Freaky Styley and The Uplift Mofo Party Plan, passed away of a heroin overdose in 1988. Frusciante, a fan of the band, joined the Peppers after Slovak’s death and immediately launched the Chili Peppers to the band we know today. Hits like “Under The Bridge”, “Higher Ground”, “Give It Away”, “Suck My Kiss”, “Californication”, “Scar Tissue”, “Around The World”, “By The Way”, “The Zephyr Song”, “Can’t Stop”, and “Dani California” are all thanks to John Frusciante. The guitarist’s ability to compose melodies and layers provided the direction Kiedis and Flea needed to create life altering music. He was constantly experimenting and changing his style, sometimes to the detriment of Kiedis, which helped the Red Hot Chili Peppers evolve into the band we all know and love today.

Unfortunately, Frusciante left the band again after Stadium Arcadium and the Peppers replaced him with John Klinghoffer- a man at least 15 years the other members junior and not nearly the talent that either Frusciante or Navarro were. The band tried to compensate for this by emphasizing its rhythm section for its next album, I’m With You- personified by the album’s lead single “The Adventures of Rain Dance Maggie”. The song starts off with a jumpy and rhythmic bass line from Flea. Soon Smith’s Stone Roses-esque drumming comes in, and even adds a bit of the melody with a cowbell beat. This is the foundation for Kiedis to sing his wacky and syllabic lyrics. In the background of all of this is Klinghoffer’s guitar. The song feels like it was written by Kiedis, Flea, and Smith and they told Klinghoffer to play whatever he wanted to, but not to interrupt the elders. It’s a good Chili Peppers song, but like the album itself, it’s noticeably missing direction from John Frusciante.

The Red Hot Chili Peppers seemed to have solved their John Frusciante problem with their newest album The Getaway. It still feels like its Flea’s and Kiedis’s project, but have properly allowed Klinghoffer to be more prominent. On “Dark Necessities”, the lead single from the album, we still start off with a bass riff from Flea and deliberate and chasing drum beat from Smith, but we also hear Klinghoffer’s melody shine through. The song’s success is hinged on Flea’s magic touch and Anthony Kiedis’ ability to pleasantly match words and syllables, but it also has a melody and an appropriate guitar solo to boot!

The Getaway still has the ghost of John Frusciante on it by being mellow and introspective, but it still has the energy the other members brings to the group. The word “stripped” seems to be commonly associated with this album, but I don’t know that that is the case. The album is certainly softer and more sedated than the Chili Peppers’ earlier work, but it’s still within the same vein as say an album like Californication. The album also benefits by being produced by hip hop producer Danger Mouse. Once part of the duo Gnarls Barkley who used to open for the Chili Peppers a decade ago, Danger Mouse is able to bring his own flavor and experience to a band already teetering on the edge of rock and rap. He’s able to focus Flea and Smith and use them to help accentuate Klinghoffer and vice versa.

Ultimately, the Red Hot Chili Peppers will always be a better band with John Frusciante steering the ship, but in his absence, I will take album like The Getaway- an album that both needs him and does great in his absence.

WHAT ARE YOUR THOUGHTS ON THE GETAWAY? LET US KNOW ON OUR FACEBOOK PAGE!