In 1981, Buddy Ryan almost lost his job as the defensive coordinator of the Chicago Bears. The team was atrocious, and the team’s owner, George Halas, was cleaning house. Head coach Neill Armstrong was let go and Ryan was soon to be next. However, Buddy Ryan was so beloved and the team cared for him so much, that they wrote a letter to Mr. Halas pleading with him to keep Ryan on. It’s a move you don’t see too often in professional sports, yet it worked. What’s even stranger is that Halas brought in former Bears tight end Mike Ditka to become the team’s head coach, sticking Ditka with Ryan and not allowing him to hire his own defensive coordinator. Even though Ditka and Ryan were not the best of friends, Ryan’s players loved him and would go to the end of the world and back again for him. That’s the type of man that Buddy Ryan was. He was a smart man, and a well-respected one. He truly was one of the titans of the game of football, and he will be sorely missed.

Ultimately, keeping Buddy Ryan on as defensive coordinator was a smart move. Even though Ryan notoriously butted heads with Ditka, the two respected each other. Ryan had his defense and Ditka had his offense. Buddy Ryan installed what came to be known at The 46 defense. Commonly misconstrued as the four – six defense (and based upon the number of defenders who would rush the passer or drop into coverage at all times), Ryan’s 46 defense was based upon strong safety Doug Plank, who wore number 46. The basis of the defense is a constant barrage of men attacking the line of scrimmage; eight men would crowd the box with 6 men at all times on the line. And the defense worked.

Thanks to future Hall of Famers Richard Dent, Dan Hampton, and Mike Singletary, rookie Wall William “The Fridge” Perry, and pro bowlers Dan McMichael, Otis Wilson, and Gary Fenick, the ’85 Bears became the true Monsters of the Midway. Not only did Ryan’s defense flat out demolish offenses, they ruined quarterbacks- often times ended up playing against team’s second and third string passers.

It is difficult to argue that the ’85 Bears did not have the greatest defense of all time. That’s why both Bleacher Report and NFL.com didn’t even try. That defense is still first in point allowed, yards allowed, rush yards allowed, first downs allowed, rush touchdowns allowed, interceptions, and takeaways. The defense had a total of 34 interceptions (20 by the starters alone), 64 sacks (an astounding 26.5 by the starters), and helped the ’85 Bears have the fifth best point differential of all time since 1970. Only five of the teams the Bears faced were able to score more than 10 points in a game. In SuperBowl 20, the Bears defense only let the New England Patriots rush for a total of 7 yards and only one first down.

I unfortunately wasn’t alive in 1986 and didn’t move to Illinois until 1990, yet that 1985 Bears teams holds a special place in my heart. Growing up a lifelong Chicago Bears fan, I always held that ’85 with such high regard. Considering all the team accomplished, it’s not difficult to see why. So when I got to work this morning and found out Buddy Ryan had passed, I felt a sadness in my heart. I unfortunately never got to witness in person Buddy Ryan’s greatness, but I always felt his effects. I know Buddy Ryan was very ill towards the end of his life and that he’s in a better place now, but his death just sucks- and I know all Bears fans feel the same way.

Obviously Buddy Ryan and his defense meant a great deal to this site as well. When I originally came up with this site, I wanted to have an entire section dedicated to sports. Not wanting to be generic and just call it "sports", I wanted to come up with a clever name for it. The name I choose for the entire sports section of this blog was "The 46". It was perfect. It's so distinctly Chicago and Bears and football and fit right in to a blog named after a specific football defensive structure.

As the NFL continues to institute rules against the type of contact defensive players are allowed to have, the game will, and has, become more of an offensive sport than a defensive one. That leaves teams less and less room to learn upon the teaching of Buddy Ryan, but it also helps cement his legacy. No team will ever have as good of a defense as the ’85 Bears, which means Buddy Ryan will always be the guy responsible for the greatest defense in the history of the sport. Ryan went on to become the head coach for the Philadelphia Eagles and the Arizona Cardinals, but he will be forever tied to the Chicago Bears. The man fundamentally changed the game and made it better, and on behalf of all Chicago Bears fans and all football fans, we thank you. Cheers. 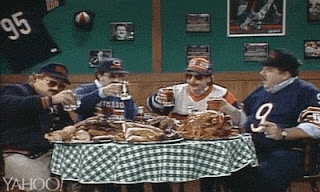 HOW DID BUDDY RYAN'S PASSING AFFECT YOU? LET US KNOW ON OUR FACEBOOK PAGE.