Kate McKinnon seems to be the break out star from this batch of SNL females. She was nominated in this category last year and she’s starring in the upcoming Ghostbusters reboot. However, my heart will always remain faithful to Vanessa Bayer, who has quickly become SNL’s true chameleon… From a current SNLer to an SNL alum we have Noel Wells for her work as Aziz Ansari’s love interest in Master of None. Like Bayer, Wells brings a calm, Girl Next Door charm to her comedy which contrasted well with Ansari’s comedy stylings… Hollywood veteran Debra Winger also played well alongside her TV significant other, played by Sam Elliot, in Netflix’s The Ranch. Winger was able to bring emotional heft and witty one-liners to help make the show as good as it was… Another TV Mother played by an TV veteran that did excellent work this past year was Loretta Devine as the matriarch of the Carmichael clan in The Carmichael Show. The show itself is mainly a medium for comedian Jerrod Carmichael to express his political views and hot button issues, but the show never loses sight of its characters and Devine helps ground the familial structure... Someone who is never grounded is Lindsay, played by Kether Donohue on You’re The Worst. Aya Cash did most of the heavy lifting this past season with her depression storyline, but it was Donohue’s Lindsay spiraling out of control after her divorce that ended up being the best part of the show… Lastly, we have Stephanie Beatriz. I love Brooklyn Nine Nine, and normally I choose both Beatriz and Melissa Fumero, but I gave the slight edge to Beatriz as the show gave her more to do with the storyline of a love interest played by Jason Mantzoukas and then dealing with the fallout of his disappearance. 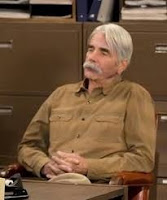 JUST MISSED: T.J. Miller and Kumail Nanjiani (Silicon Valley) I love Miller and Nanjiani as comedians and on Silicon Valley when I watched it, but I just can’t watch the show anymore thanks to Thomas Middledicth’s character’s timidness. It’s too much.

Despite The Ranch being really funny, it seems like it’s not “prestige-y” enough for Emmy voters. I hope they look past that because 1) they can actually watch a show that will make them laugh and 2) Sam Elliot is great in it- as he always is. The man is great even as a voice-over in car commercials. He deserves more awards than he has… Sam Waterston is by far and away the best past of Grace and Frankie, yes, even better than his ex-TV-wife Lily Tomlin. He brings a softness and sweetness to the role, and you can even root for him after he cheats on Martin Sheen’s character and lies to him… Max Greenfield has always been a fan favorite on New Girl as the lovable douche Schmidt, but with Zooey Deschanel gone for a handful of episodes and Schmidt’s wedding to CeCe being a major storyline last season, Greenfield really shined as a sitcom star… Paul Rudd is a legitimate movie star, which is why his inclusion into an TV award race seems almost unfair, but that doesn’t stop how superb he was reprising his lackadaisical, playboy character Andy from the Wet Hot American Summer film for the TV show…  As mentioned before, The Carmichael Show is mainly an excuse for comedian Jerrod Carmichael to do a 30 minute stand up set to a mass audience every week, but it really works because of the characters, and David Allen Grier is the comedic lynchpin that holds the sitcom family together… Andre Braugher is amazing. The End.

JUST MISSED: Julia Louis-Dreyfus (Veep). Like Silicon Valley, Veep is another show that I can’t watch anymore. I gave it a try and I just don’t find it terribly funny.

I enjoy Gillian Jacobs so much more when she’s the cool one who’s life is spinning out of control like she is in Love versus the butt-of-the-joke like she was in Community. Jacobs was always a great actress, but we finally got to really see it… I have no idea why Ellie Kemper didn’t receive a nomination last year, yet Unbreakable Kimmy Schmidt and two of Kemper’s co-stars did. Hopefully things will change this year and she’ll finally get the respect she deserves… Someone else that gets no respect is Abbi Jacobsen for her work on Broad City. Critics seems enamored with her other half, Ilana Glazer, but give me the funny straight-woman any day of the week… Michaela Watkins and Sharon Horgan got a chance to shine this past year on streaming services. Both are very funny, yet got a chance to exercise their dramatic chops as aging single ladies navigating this new world… Despite all of her success, Amy Schumer came back to her basic cable show and still delivered biting and amazing comedy. TV is better because of Amy Schumer.

JUST MISSED: Jerrod Carmichael (The Carmichael Show). I love his show and his vision, but his acting just isn’t up to par with his comedy and vision.

I can understand why Variety would call Tommy Dewey’s Alex Cole “another permutation on a character we’ve seen, oh, 20 or 30 times before. He’sa code-writing Peter Pan, one who’s good looking enough to bed plenty of womenbut who resists commitment as if it were the plague”. However, I think Dewey helps transcend and evolve the architype. Alex is truly a broken and a messed-up character, but still searches to the best of his abilities to find love and happiness. Dewey’s charm helps his character become the true star of Casual… I love goofy, over-the-top Andy Samberg, but he’s at his best when he’s slightly toned like he is on Brooklyn Nine-Nine. Samberg has always been great on the show, but he really got a chance to shine this past season as the show delved deeper into Samberg’s Jake Perrelta’s relationship with Fumero’s Santiago… There are times where I’m convinced that Rob Delaney has snuck into my house, taped the arguments I’ve had with my wife, and then use them on Catastrophe for comedic gold… Aziz Ansari doesn’t have the greatest acting range, but he’s more than made up for it with his charm and satirical take of the Hollywood industry and Eminem songs… Along the lines of my dislike for Silicon Valley, I really don’t like timid, nebbish dudes on television, but I ended up enjoying Paul Rust’s Gus on Love. Gus was confident when he needed to be and ended up being a really good comic foil to Gillian Jacobs’ Mickey… Say what you will about Ashton Kutcher, but the dude is charming as balls and The Ranch is comical. A lot of shows and comedies these days aren’t terribly laugh-out-loud funny, but this show and Kutcher’s character are.

I wrote about The Carmichael Show and The Ranch here. They’re great shows that feel out of place in today’s comedy landscape, and worthy of our praise… There are no truly great TV comedies at the top of the mountain, but the one close to it is the always solid and reliable Brooklyn Nine-Nine. It’s never been as good as say its predecessor Parks and Recreation, but it’s still easily one of the best sitcoms on television… I didn’t start out even liking Love (having a 40-plus-minute pilot doesn’t help matters), but as Jacobs’ Mickey and Rust’s Gus starting dating and as their relationship started to form and blossom, the show became truly binge-worthy. The second half was so good that it left a positive taste in my mouth… It also took me a little while to get into Master of None, as I felt like I’ve seen the series before when I read Ansari’s book Modern Romance, but I grew to love Ansari’s point of view on things like Indians on TV. Ansari was able to juggle satire with the romance of his character Dev and Wells’ Rachel for one of the best TV watching experiences of 2015… It was difficult for me to choose which show I wanted as my last “spot” and I struggled with Casual and Catastrophe. Ultimately, it came down to which show I enjoyed binging on more (I saw both in one sitting) and I liked Casual just a touch more as I never felt like it dragged the way Catastrophe did. Catastrophe’s highs were higher, but in only six episodes (compared to Casual’s 10) I should never have the thought “Is this really still going”? Don’t get me wrong, but shows are excellent are worthy of a nomination, but Casual got the slight edge for me. Also, what can I say, I’m a sucker for Jason Reitman.

WHAT DO YOU THINK WERE THE BEST TV COMEDIES OF THE PAST 12 MONTHS? LET US KNOW ON OUR FACEBOOK PAGE!

Email ThisBlogThis!Share to TwitterShare to FacebookShare to Pinterest
Labels: 2016 Emmy Nominations, 2016 Emmys, Brooklyn Nine-Nine, Casual, For Your Consideration, If I Had An Emmy Ballot, Master of None, The Carmichael Show, The Ranch, Trivia Night, TV Comedies
Newer Post Older Post Home